How Can I Help My Tornado-Traumatized Cat?

Last Tuesday, there was a tornado here in Oklahoma City. Between the storm and the warning sirens, my 3-year-old gray tabby has been extremely traumatized. He slept without moving Tuesday night and all day Wednesday. I started giving him Rescue Remedy three times a day and giving him water through a dropper. He is now walking better, drinking water on his own (I still offer it to him several times a day) and is moving more freely. He purrs but doesn’t want to be picked up yet, and in fact he’ll meow when I do so. He is eating some of his treats but he still doesn’t want any of his usual food. He has slept with me the last two nights, and he’s using the litter box on his own. Should I just keep watching him and encouraging him to eat and drink, and with time, will he come through this trauma? 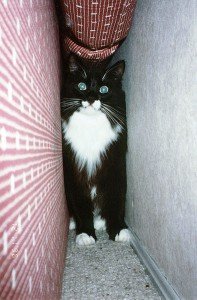 Hiding is typical behavior for severely frightened cats. Photo by Mark; distributed under a Creative Commons license via Wikimedia Commons

Siouxsie: Thank you for writing, Ruby, and we send our deepest compassion to you and your cat — and to all the other people and animals in the U.S. Southeast and Midwest — who have had to endure so much trauma, grief and loss in this awful storm season.

Thomas: Because of all this terrible weather, we’re sure millions of other people and pets are experiencing similar issues. We hope our answer will not only help you, but also other caretakers who are trying to ease their animal companions’ trauma.

Dahlia: Your cat is experiencing all the typical signs of extreme stress and fright: being petrified, losing his appetite, changes in behavior (like not wanting to be picked up), and perhaps extra neediness (we don’t know if your cat normally sleeps with you, but if he hasn’t before, that means he’s seeking comfort).

Siouxsie: Although it sounds like your cat is having a normal reaction to terrifying circumstances, it would be a good idea to call your vet and see if they think he should come in for a checkup. You wouldn’t want to assume the problem was behavioral if your kitty were actually sick.

Thomas: You’ve been doing the right thing by giving your cat regular doses of Rescue Remedy. Mama gives us Rescue Remedy if we go through traumatic things, too. She puts a drop on her finger and then rubs it into the fur on the top of our head.

Dahlia: Rescue Remedy tastes awful, so we don’t like to drink it or have it put in our mouths.

Siouxsie: We hope you’ve been giving yourself Rescue Remedy, too!

Thomas: Keep your cat hydrated and get him eating again. Cats that don’t eat can get sick pretty quickly.

Dahlia: If he was eating when the sirens went off, he may be associating his regular food with the trauma he experienced, so try different kinds of food. Canned food is often more tempting for cats than dry food, so you might have better luck with an extra-stinky flavor and a different brand.

Siouxsie: It’s important for you to manage your own emotions, too. We cats are very sensitive creatures, and we pick up on the “vibes” you’re putting out. If you’re still traumatized, your cat will know this even if you’re putting on a brave face.

Thomas: When your cat comes to sleep with you, or if he seeks you out for affection, pet him and reassure him. Tell him he’s safe now, and even though you were really frightened too, the storm is over and things are back to normal.

Dahlia: See if you can distract him from his fear with some play time. If you have a cat fishing pole or some other “thing on a string” toy, he might be enticed by it and start to come out of his shell again.

Siouxsie: Holistic therapies can be helpful for traumatized animals, too. The homeopathic remedy Aconitum napellus (also known as Aconite) is a fairly common treatment for fear, especially when the fear is caused by emotional trauma. Phosphorous is another homeopathic remedy commonly used for animals that are scared of thunder and lightning and other loud noises.

Thomas: Veterinary homeopath Kaetheryn Walker suggests giving the remedy Aconite 30C: dissolve four pillules in a dropper bottle of water and then give the affected animal four drops of the solution, twice a day, until the symptoms begin to abate. With Phosphorous, do the same thing: four pillules of 30C potency dissolved in water.

Dahlia: Homeopathic remedies should be given at least 15 minutes before or after eating.

Siouxsie: If you know anyone who practices Reiki, a form of energy healing, this can be very good for cats dealing with physical or emotional trauma.

Thomas: I love it when Mama gives me Reiki!

Dahlia: Flower essences are also helpful for traumatized animals. We like Green Hope Essences because they’re preserved with red Shiso root rather than alcohol.

Siouxsie: Their The Arbor Garden and Anxiety essences might be a good start, but they can also help you figure out what might work best for your cat’s situation.

Thomas: It will take time and patience to help your little guy get over the terrifying experience he had, but with your help and support, it will happen. If none of the remedies above works, your vet may consider a short course of anti-anxiety medication to get your cat on his paws again.

Dahlia: So, in short: First, call the vet and ask their advice. Manage your own emotions. Get your cat eating again. Use holistic remedies to help support him in his recovery. And if things don’t seem to be getting better, talk to your vet again and see what he or she recommends.