How Can I Get My Cat to Take His Medicine?

My kitten is around 8-1/2 weeks old and recently he has been acting very strange. I got him from a “not so kitten loving” bloke a week and a half ago, and he claimed the kitten has been dewormed and de-flea’d already but need a little encouragement in using the litter tray. Two days after moving into the house with me and our other kitten, he started using the tray like a champ. 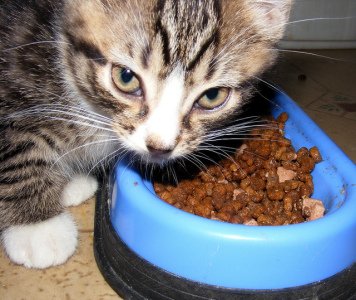 We feed both cats the same food at the same time, so we know when they need to do their business. Last week, the new kitten started having diarrhea so we went and got some worming tablets, which I put in his food. But whenever he smells the food (and presumably the tablet, too) he scratches around his bowl and tries to eat off the other kitten’s plate! Also, since he been having diarrhea he has begun having diarrhea in random places around the house — like under the table — instead of the litter tray.

Please help as I can see he is behaving abnormally, always dehydrated and refusing to eat anything! How do I get him to take the worming tablet?

Siouxsie: Ruby, if your kitten is dehydrated, refusing to eat (whether or not this has anything to do with the worming tablet in the food) and having diarrhea, he really needs to go to the vet.

Thomas: There are a lot of things other than worms that can cause diarrhea in cats. Some of these are parasites like giardia, some are food intolerances, and some are illnesses that can be contagious to other cats — especially if those cats are sharing a litter tray.

Bella: I don’t know how it is where you live, but a lot of the dewormers sold at pet stores here in the U.S. really aren’t all that effective.

Siouxsie: Not only that, but almost all dewormers, from the vet or otherwise, are extremely bitter — and it’s no wonder your kitten doesn’t want to eat that tablet (or any of the food associated with it).

Thomas: Mama once gave me a pill in food. I knew it was there and I could smell that it tasted terrible, so I didn’t eat it. Mama realized the error of her ways pretty quickly, but I’ve refused to eat that flavor of cat food ever since.

Bella: Probably the reason the poor little guy is having accidents is that it’s really hard to stop diarrhea from coming out, and if a kitten can’t get to the litter tray right away, he’s going to go where he is.

Siouxsie: With two kittens, you really should have two, if not three, litter trays in different parts of the house. That will make it easy for kittens with small bladders and grumpy tummies to easily find an appropriate place to do their business.

Bella: If you have the litter trays in separate rooms, there’s no way a cat can be in two places at once to guard two litter boxes, which again, sets both kittens up for toileting success.

Siouxsie: So, Ruby, please take your new kitten to the vet, and bring a sample of his poop with you so they can check it for worms or other parasites. If your kitten does have worms, your vet may be able to give you a wormer that will be easy for you to give him without mixing it into his food. He or she will also be able to get the little guy rehydrated and make sure there’s nothing else wrong with him.

Thomas: And try feeding the kitten a different flavor of food, so he won’t refuse to eat just because he has bad memories of the worming pill.

Bella: Please don’t delay in getting that little guy to the vet because kittens get very sick, very quickly, if they don’t eat and have diarrhea.

Siouxsie: Please write back and let us know how things turned out.

Thomas: Oh, and don’t forget to have both of those kittens spayed or neutered as soon as they get old enough!

Bella: What about you other readers? How have you helped kittens who won’t eat? Share your tips in the comments.