Help! We’ve moved in with my step-son and his family. They have two kittens, approximately 9 months old. They have the worst ammonia and stool odor I’ve smelled in cats in a long time. They both appear to be healthy and both are fixed (a male and a female, brother and sister), no UTI-type behavior but man, even cleaning the litter box every single day it’s awful! We have a cat, too. Her littler box doesn’t smell. It never has. We’ve switched the litter for the kittens to what we use because it’s been awesome in controlling the odor for our cats now and in the past. The litter change hasn’t made any difference. I’ve even tried sprinkling activated charcoal (fish filter stuff) on top. It’s worked for other cats but not these two. The ammonia smell is so strong it makes one’s eyes water and burns the sinuses. What could be going on and do you have any tips for us to try to change this odor problem? 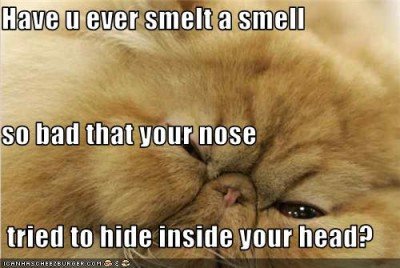 Siouxsie: Boy, Barbara, I feel bad for you. Not just you you, but all of you — it’s no fun to live with that kind of stench, and especially not for the cats, whose noses are much more sensitive than humans’. But fear not; we do have a couple of ideas that might help.

Thomas: First of all, the smell of what comes out is directly related to what goes in.

Bella: What we mean is that there are some foods that almost always cause foul-smelling poop in cats, and chief among these is milk.

Siouxsie: Actually, any dairy products at all. Despite all the pictures of cats lapping up milk or cream from a bowl, the vast majority of us are lactose-intolerant because we don’t have the necessary enzymes and bacteria in our gut to break it down into a form that doesn’t reek.

Thomas: You don’t mention whether the kittens also have diarrhea, but if they do, that can be a sign of either parasites or an intolerance to something in the food they’re eating.

Siouxsie: Of course, not everybody’s into feeding raw, and the food we’re eating is on the expensive side. But there are plenty of foods you could try that are more affordable and might help the smell problem.

Thomas: If you’re feeding kibble, go with the highest quality you can afford and avoid products with artificial colors. With canned food, stick to the classic pâté formulas rather than chunks in gravy styles. Those gravies tend to be made with corn starch and other stuff cats may find hard to digest.

Bella: To deal with the urine odors, the best thing you could do is get those kittens drinking more water. The more water they drink, the more dilute (and therefore the less smelly) their pee will be. A lot of cats seem to like drinking from pet fountains because the moving water is more appealing than stagnant water sitting in a bowl for days.

Siouxsie: We’d recommend staying away from the plastic fountains, though, because plastic gets gross pretty easily. Steel and ceramic models work best in that regard.

Thomas: As far as litter goes, we’d recommend a clumping formula. It’s easier to clean the urine out of the box, and therefore the pee won’t sit in there and stink. Our two favorite clumping litters are World’s Best Cat Litter and Blue Naturally Fresh, although clumping clay formulas are less expensive.

Bella: For after-the-fact odor control, our friends at The Happy Litterbox (which, by the way, is a great resource for all things litter-related) strongly recommend a product called Nose Offense — a completely fragrance-free and nontoxic air deodorizer.

Siouxsie: And finally, Barbara, we’d recommend a talk with the vet. Cats’ urine and feces are not supposed to smell so awful they make you gag. You might consider bringing a fecal sample to have it tested for parasites — just in case — because worms and other nasties can cause very foul-smelling poop.

Thomas: Good luck, Barbara. We hope this helps you and your family to resolve your stinky situation.