Did I Do the Right Thing When I Had My Cat Euthanized? 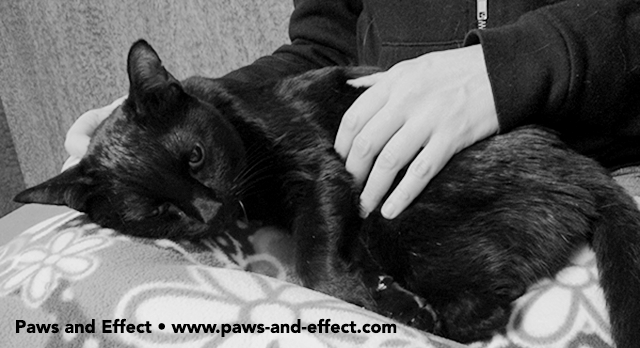 In August, my cat got hit by a car. A neighbor found him but again he seemed OK after a visit to the vet. All went well until one week ago. On Tuesday, he collapsed and was screaming in pain. We took him to the vet who told us he was extremely constipated and he was sedated for an enema. He came home and the next day I realized he was making the motions of going to the toilet but was unable to pee. His hind leg was also sitting funny with the toes turned in. I then noticed he was very swollen and bloated. His whole body looked full of fluid. I took him back to the vet and they expressed his bladder and bloody pee came out. They kept him overnight on a drip and catheter to check for blockages but found none. Blood tests also showed his kidneys were under pressure. I took him home Friday. He was eating and drinking and peeing but it was still bloody. His bladder was distended and rock hard, no matter how much fluid came out of him. By Sunday he was wetting himself constantly but was bright and alert. But I decided it was time. Please tell me I did the right thing. I am doubting myself so much, but the vet said his kidneys were done. I could have kept him few more days but I didn’t want him to really really start suffering. I’m heartbroken.

Thomas: Oh, Ciara, the euthanasia decision is one of the hardest anyone has to make.

Bella: We’re not surprised you’re feeling guilty and wondering if you did the right thing.

Tara: But rest assured, since your decision was made with compassion and love, it was the right decision.

Thomas: Because his kidneys were failing and he was unable to urinate or poop correctly, your cat would have suffered more and more.

Bella: It’s not uncommon for cats to have severe bowel and bladder problems, especially if they get hit in the hips. And sometimes those bladder problems can lead to acute kidney failure, which is most likely what happened to your beloved cat.

Tara: Mama had a hard time making the decision with Siouxsie, too. That’s her in the picture above, during her final vet appointment.

Thomas: In fact, Mama cried a lot when she called the vet to make the euthanasia appointment.

Bella: Even when you know logically that it’s the right decision, your heart will always wonder.

Thomas: When Mama was struggling to make the decision, she remembered her vet’s words: Better a week too early than an hour too late.

Tara: Because you didn’t wait until your kitty was really suffering, you made the best possible decision, and it was made with love for your sweet kitty friend.

Thomas: What you’re going through is a normal grieving process. And right now, you’re in the guilt part of that process.

Bella: A lot of guilt comes along with electing euthanasia for a beloved animal companion. It feels, to some extent, like you’re playing God, and you always wonder if you took him for that final vet visit too early.

Tara: Siouxsie was pretty bright and alert when Mama made her decision, but she knew Siouxsie was just tired. Tired of being in pain, tired of fighting, tired of having to take pills. Even so, Mama still felt guilty.

Thomas: She felt guilty when she had our beloved Dahlia euthanized, too. But in that case, she wondered if she’d waited too long.

Bella: It was harder for her to think she’d waited too long, actually. Waiting too long means a kitty suffers too long.

Tara: We can never tell for sure, but what we can tell you is that euthanasia is a hard decision for everybody who takes that step to release their beloved cat friend from suffering.

Thomas: Rest assured, you’re not alone. Cat lovers all over the world have the same kind of feelings you do.

Bella: It might help you to go to a pet loss support group or find a community online where you can share your feelings.

Tara: We hope we’ve been able to provide you at least a little bit of comfort during this difficult time. Please know you’re not alone.

Thomas: Everybody who reads this blog has made that euthanasia decision at least once.

Bella: To you other readers, if you would comment with your support and compassion, we’re sure Ciara would deeply appreciate your kind thoughts.

Tara: We know your words will help Mama find peace with her decisions, as well as Ciara.

Thomas: And if you’ve had to have your cat put to sleep, our compassion and condolences are with you, too.

Chat With a Vet

This site collects information via the use of cookies and through our email subscription form. Please view our privacy policy for details on how we use your information.

This website uses cookies to improve your experience while you navigate through the website. Out of these, the cookies that are categorized as necessary are stored on your browser as they are essential for the working of basic functionalities of the website. We also use third-party cookies that help us analyze and understand how you use this website. These cookies will be stored in your browser only with your consent. You also have the option to opt-out of these cookies. But opting out of some of these cookies may affect your browsing experience.
Necessary Always Enabled

Any cookies that may not be particularly necessary for the website to function and is used specifically to collect user personal data via analytics, ads, other embedded contents are termed as non-necessary cookies. It is mandatory to procure user consent prior to running these cookies on your website.