Dahlia Tells All: Worst. Day. Ever. 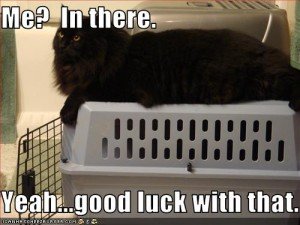 Finally! Mama’s found some time in her busy, busy schedule for me! Honestly, you’d think I wasn’t the most important living being on the whole planet, the way she ignores me.

Anyway, I’ve spent a lot of time over the last several weeks thinking about the story I’d tell you the next time Mama gave up her criminal neglect of her most wonderful, awesome and cute feline overlord. After all, even a celebrity cat like me has a life that’s mostly ordinary. But then it came to me–I simply had to tell the story of the worst day I ever had.

It all started pretty innocently. Every day for weeks, Mama filled her car with boxes and went to work. When she came back home, the boxes were gone. She said we were going to move to a new home, but I didn’t quite know what to make of this. After all, my tiny dusty little apartment was the only home I’d ever known, and Mama promised I was going to my forever home when she adopted me. Was she breaking her promise?

I asked Thomas, and he said not to worry. “Moving doesn’t mean you’re losing your forever home,” he said. “Forever homes are with the people who love us, and as long as we’re with our person, it it doesn’t matter where we live.”

I wasn’t sure I believed him, but I knew things were coming to a crescendo of chaos when Mama said, “We’re going to our new home tomorrow!” She sounded excited, but I sure wasn’t.

Then she took me back to nasty, evil Doctor Sarah, where I had to get some shots and be poked and prodded. Well, I was hissing mad after that! Nothing Mama said could make me feel better. I turned up my nose at supper and slipped out the door and into the night when she opened it.

“Wait a minute!” Thomas called after me. “It’s dangerous out there with the Barn Cat on the prowl!” He sprinted for the door but Mama slammed it shut, missing his nose by a whisker.

I could hear him begging Mama to let him out so he could protect me, but she said, “No, Thomas, I want you inside when it’s time to leave tomorrow.”

Oh, I reveled in my freedom! I’m embarrassed to admit this, but I even rolled around in the dew-covered grass! Sure, it was chilly outside, but I was so proud of myself for escaping that I just had to rub that wonderful fresh smell all over me.

After a thorough exploration of my land, I realized I was pretty hungry. It was a good time to catch a little smackerel of something to tide me over until I deigned to return home. Thomas had given me some hunting lessons, so I’d gotten reasonably good at it. A couple of shrews later, my stomach was full and I decided to retire to the barn for a nap.

But I was not going inside! Never!

I knew there were lots of comfortable hay bales in the attic, so I climbed up the jumbled piles of furniture and metal, onto the attic steps, and made myself a little nest in a pile of loose hay. Sure, it made me sneeze a little, but so what? I was so tired I was in full nap mode before I could even get a purr out.

When I woke up, I was on my feet, arched as big as I could get, my fur standing up all over the place and in mid-hiss!

A pair of baleful orange eyes glared at me from above. His thundering growl made my insides tremble.

It was the Barn Cat!

“What the *hisssss* are you doing in my barn?” he spat.

“Says Mama! And Thomas, and Siouxsie!”

“I think you don’t know who you’re talking to,  kitten!” he snapped. “Now, get the *hisssss* out of my barn before I make you regret it!”

He jumped off his hay bale and the floor shook as he landed.

My Bast! I’ve never seen a cat that big! He must have been at least 15 pounds of shaggy, orange-striped mayhem. He slitted his eyes and gave me another vicious hiss. The fang missing from his upper jaw made him look even scarier.

I knew Thomas would never put up with the Barn Cat’s impudence. I had to stand my ground. You know the old saying, “Yowl your truth even if your voice quavers,” right? Well, I did just that!

“You nasty, half-feral, flea-bitten, snaggle-toothed wormsack of a cat!” I growled, “You don’t deserve to even lay eyes on a civilized cat like myself!”

“Dahlia?” I heard Thomas calling from inside. “Are you all right?”

Before I could answer, the Barn Cat leapt at me and clamped down on my front leg with his festering mouth. I cried in pain and tried to rake at him with my hind legs as I flailed in panic. I yelled and screamed and hissed and struggled with all my might, but I couldn’t get loose!

I could hear Thomas yelling, “Mama! Mama! The Barn Cat is beating Dahlia up! Pleeeeeease let me out so I can help her! Mama! Mama! Maaaamaaaaaa!”

Somewhere along the line I must have managed to swat the Barn Cat in the eye because he let go with a hiss. I tried to run, but my leg collapsed under me and he sank his fangs into my butt!

I swatted him again and limp-staggered into the smallest, deepest hole I could find.

I could hear him hissing and swearing as he tried to reach me. I panted, my eyes leaked, and I prayed that he wouldn’t find a way in.

Hours later, I heard stirring downstairs. The food bag was coming out, and I could hear Thomas and Siouxsie singing the Breakfast Song. I was so hungry I thought my stomach was going to eat itself. The sky was light, so I was pretty sure the Barn Cat had gone wherever nasty, half-feral punks go during the day. I stood up to stretch … or at least, I tried to.

My leg gave out under me again. The pain was unbelievable! My eyes watered. How was I going to get back inside? Was I going to be stuck out here forever? Would anybody be able to find me, or was I just going to die in this little hole, alone and scared?

I knew Thomas would find me, if Mama ever let him out again.

My eyes started leaking all over again.

“Glorious Flower of Wisdom?” I asked the disembodied purr.

“Yes, darling, it’s me. Now, lick your tears dry and let’s go. I’ll get Mama to come outside.”

It was a long, clumsy trip out of the hole, along a narrow beam (I’m embarrassed again to say I nearly fell … more than once!) and between those huge pieces of dusty old furniture.

The door opened. “Dahlia,” Mama called in a sing-song voice. “It’s breakfast time. Come on in.”

“Meep,” I cried. I lost my footing and a piece of lumber slid sideways and I landed right on my sore leg!

“Dahlia? Are you all right?”

“Dahlia … where are you, sweetie?” she asked. I could hear the worry in her voice.

I stuck my head out from under a chest of drawers. “Mama!” I cried. “Help me!”

I slunk out and limped toward her.

She took a step toward me and I ducked under the bureau again.

“Dahlia. I can’t help you if you don’t come out. Now come on, stop being silly.”

With my head hung low and my tail dragging, I limped toward her. She picked me up gently and gave me a kiss. “It’s okay, sweetie. We’ll fix it.”

She set me down on the bed and gave me a dish of kibble. I took a couple of bites as she picked up her phone and made a call.

I knew it. I was going to have to go back to the vet!

I’m so sorry to say that Dahlia died on April 12, 2012. She was suffering from a form of cancer with a very poor prognosis and she was very ill and in great pain and distress. The kindest thing I could do was to release her from her body and let her soul go free. This is the final chapter in Dahlia’s memoir … at least, for now. ~ “Mama” JaneA

See the rest of the story