Dahlia Tells All: The New Lady

Sure enough, just like Glorious Flower of Wisdom told me, the Shelter People put my brothers and me into awful traveling boxes again, and moved us into an even bigger box that the Shelter Person called a van. While we sat in this Van Box, we heard all sorts of terrifying clanking and clattering from behind us.

Then the Van Box we started moving. We didn’t know where we were going this time, so we cried and wailed and wailed and cried some more. The Shelter Person who was with us didn’t seem to care at all, so I took matters into my own paws and made a huge poop in my crate.

For some reason, my brothers didn’t seem to think this was a good solution to our problem. One of them even swatted me! And then as we went around a corner, he fell over and rolled into my prized creation. Served him right, I say.

Now look what you’ve done! he hissed. Couldn’t you have at least waited until we got wherever we were going? He set to grooming himself, but not without quite a few disgusted glares at me.

Finally the Van Box stopped moving and its belching and rumbling stopped. But the torture wasn’t over yet.

The Shelter Human took our box out and walked us across a smelly, noisy alley and through a door with a bell that jingled and jangled and hurt my ears.

“Oh, here they are,” I heard a gentle-sounding female human voice say.

“Yes, here they are. And I’m afraid they’re all going to need a bath,” said the Shelter Person. “They messed all over their crate on the way here.”

It wasn’t “us,” it was all her! one of my brothers yelled.

“Oh, how cute!” said the Other Lady. “I love the sound of kittens mewing!”

“If you want, I can leave them outside until I get the cage set up,” the Shelter Person said.

You’d better not! I yelled.

“You don’t have to do that, said the Other Lady. “I’ll just put them in the bathroom until you get everything sorted out. Then we can give them a bath.”

True to her word, the Other Lady picked up our box and moved us into a tiny room with a roaring fan. Through the noise, I could hear the clanking of a cage being assembled — not to mention all kinds of other odd whirrs, clicks, thumps, hums, and the occasional jingle-jangling of that horrid bell.

We all settled in for a quick nap, doing our best to avoid the spot I’d graced with my bodily waste, until the door opened again and we all jumped to attention.

“Okay, let’s see the damage,” the Shelter Lady said as she gingerly opened the door of our carrier. She picked each of us up and inspected us and, finding that only my unfortunate brother had really gotten dirty, took the rest of us to the cage she’d set up in the other room.

Well, let me tell you! It was cold and breezy in that big room, and the air was stinky in a way that I can’t even begin to describe. I swear, dog poop smells better than the air in that place. But the Other Lady (who I discovered had a beautiful mane of ginger hair) and The Man were very kind to us. They picked us up and petted us and played with a couple of our toys. We sure had a lot of fun!

But if I thought my other brother was upset when he fell into my poo, I had no idea how furious he’d be after he got A Bath.

When the Shelter Lady brought him back to us, his hair was sticking up in little points all over him and his tail looked so silly and skinny. I laughed out loud — until he boxed my ears.

And so the naps went by. I learned that this place was called a Copy Shop and that it was the Copies that stank so much. But even though the place reeked, we got lots of food and loving petties from the Ginger-Haired Lady and The Man … and the people who came into the shop to get their Copies.

It sure seemed like a lot of time was passing, though. I started to wonder if Glorious Flower of Wisdom had been wrong and maybe I wouldn’t meet my person here. Or worse yet, maybe I had met my person but I hadn’t been charming enough to make an impression.

Then one day, just after my brothers and I had settled down for our mid-morning nap, the bell jingle-jangled and a lady trotted in. Right away, she got down to the business of ordering the Copies she needed. But I could tell she was looking at us even while she was talking to the Other Lady.

I had the strangest sensation inside me as I looked at her. It was like I was being pulled in her direction. I cried and waved, and the New Lady looked up at me and smiled. I could tell she loved cats by the way she looked at me. Well, that and the smell of other cats on her clothes and the energy of other cats that surrounded her and danced through her aura.

She looked at me and smiled again. “Who are the kitties?” she asked the Other Lady.

“Oh man, they sure are cute,” the New Lady said. “Could I come behind the counter and pet them?”

The New Lady took us out of our cage, one by one. Each time she picked up one of my brothers and petted him until he purred, I got scared: What if she picks him instead of me? I thought. I know she’s my person! I just know it!

But she thought she wasn’t looking for a cat. She was just trying to be nice and give the shelter kitties some love.

Then finally it was my turn. The New Lady picked me up and I rubbed my head all over her face and threw my paws around her neck and purred for all I was worth! You’re my Mama, I cooed.

Mama knew she had to go back to her office, but she couldn’t put me down. “Oh, God, I’m a sucker,” she said through my fur.

“I really want to take you home,” Mama finally told me. “But I have to ask my other cats first.”

“Don’t worry, Blackie, I’ll be back before you know it,” she said. 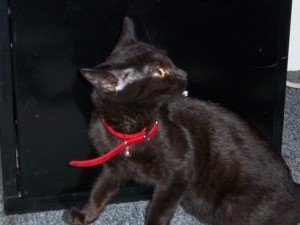 This is a picture of me on the day Mama adopted me. Look how tiny I was!

The next day Mama came back and told the Other Lady, “I want to fill out an adoption application for Blackie.”

She spent a few minutes writing on a paper, then left that paper with the Other Lady.

I guess everything must have been OK, because it was only a couple of naps before Mama came back. She picked me up and said, “It’s time for you to come home and meet your new brother and sister.”