Dahlia Tells All: The Guest From Hell

After Siouxsie and I settled our little dispute, things got much calmer in our little apartment. With our newfound understanding, it seemed as though our lives were forever changed for the better. But when a white car arrived at the farm in the deep of winter, there was no way I could have known it would bring a hurricane-sized cat-tastrophe with it.

Of course, I noticed that when the car arrived, some things changed right away. With the addition of four more people, there was even more barking and screaming coming from the big house – along with the wails and cries of human kittens and the endless yapping of some dog-like thing that was no bigger than Thomas.

With all the excitement, I guess it’s understandable that I missed the other new arrival.

But then one afternoon, Barking Man and Yallin’ Man (that was the new male human) were outdoors feeding the goats. They stopped for a quick smoking break and SHE came around the corner.

“Hey, Mista! Throw me somethin’!” the agouti-furred cat called, swishing her tail to the side and casting her rump provocatively into the air.

“Oh haah, Miz Kittih,” said Yallin’ Man as he reached down to pet the offending puss.

Barking Man said, “That cat’s in heat, you know. You’d better get her fixed before you’ve got a litter of kittens on your hands.”

“But Ah caint afford to do that,” Yallin’ Man said. “Ah haven’t been able to fahnd a job up here.”

The cat rolled around on a patch of dry ground with her tail whipping back and forth. “Mah honeypot’s on FAIIIIIIII-yaaaaah!” she cried.

“You should ask her,” Barking said, pointing to Mama’s apartment. “She loves cats, and she’ll be willing to help you do the responsible thing.”

Siouxsie uttered a grumble as she stared down at the tableau below. “Look at that little minx!” she sneered as the four-legged intruder continued her flirting.

Well, the caterwauling and carrying on only got worse from there. And sure enough, the Yallin’ family did discuss Miz Kitty’s delicate state with Mama, as well as the fact that they were at a loss as to how they were going to do what needed to be done.

Naturally, Mama, being who she is, told them she’d take care of it. I snickered as I listened in on Mama’s phone call to the vet’s office: that cat was gonna get shots, a checkup, FIV and leukemia test, and finally … a Spay!

“Nanny-nanny-boo-boo,” I sang to Miz Kitty the next day as she strutted around the yard. “I know something you don’t know!”

I didn’t know how she managed to look down her nose at a cat sitting 10 feet above her!

But I was the one who had the last laugh when Mama swept Miz Kitty into a portable prison and whisked her off to Doctor Sarah.

“Well, that takes care of that,” Siouxsie said, cleaning and buffing her whiskers with a front paw. “We’ll never have to see that peanut-headed little hussy around here again!”

A few days later, I was rousted out of my afternoon nap by the sound of Siouxsie uttering her most menacing growl. “What is it?” I gasped.

“She’s back!” Siouxsie snapped. “That nasty, snooty little funny-furred freak of a cat is BACK!”

Sure enough, when Mama opened the door, she was carrying a crate full of sleepy Miz Kitty in one hand and a bunch of grocery bags in the other.

We all sat in front of the portable prison and glared at Miz Kitty while Mama turned on the heater. The still-sedated cat opened one eye and looked at us.

“Well, how do you do?” she said in a syrupy voice. “Ah’m Miz Katrina, and it’s a pleasure to make your acquaintance.”

Thomas sat up straight. “Why madame, the pleasure is all mine,” he responded.

“Cher, I survived the worst storm ever in history. I dang near blew away in all that rain and wind, and I can certainly survive a little ol’ spayin’.”

“This is my house, and I’m the Top Cat,” Siouxsie said. “As long as you remember that, we’ll get along just fine.”

That was about the last time any of us were on speaking terms. 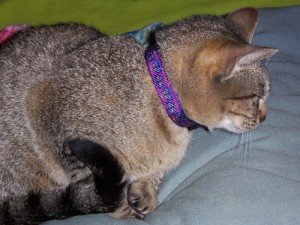 There she is: the intruder herself! I'm still traumatized when I see pictures of her. *sniffle*

As soon as Miz Katrina recovered from her surgery, she started chasing me around the house and clawing at me! Of course, she never did it when Mama was home. All Mama ever saw of Miz Katrina was purrs and snuggles and Please and Thank You, Ma’am.

But Mama was no fool. She saw the tufts of fur left from the daily fights. She couldn’t help but notice the misery in Thomas’s eyes as Miz Katrina pushed him out of the way to demand petties. And as for me, I spent all my time hiding under the bed. I only came out to eat because Mama was around and I knew she’d protect me. When Mama was away, I couldn’t even go to the litterbox without Miz Katrina beating me up!

But I was so sad! I didn’t think I’d ever be able to snuggle with Mama again! I skulked around the edges of the room with my head low and my tail practically dragging on the ground.

Finally, entirely too many naps later, Mama decided she’d had it! It happened when I was just trying to get a drink of water and Miz Katrina pinned me to the floor and started raking at my tummy with her claws. Mama stomped her foot and smacked her hand on the table. “That! Is. Enough!” she yelled.

The four of us ran for the corners as the goats bleated their annoyance at their noisy upstairs neighbor.

“The four of you listen up. Especially you, Miz Katrina,” Mama said. “Katrina, I welcomed you into my home because you needed a place to stay. But I told you even as I was taking you home from the vet that you have to get along with Siouxsie, Thomas and Dahlia if you’re going to stay.”

“It’s been almost a month, and you’re still fighting with your hosts … and you need to drop that attitude right now!”

I slunk out from my corner and gave Mama’s boot a tentative head-rub.

Miz Katrina glared at me. “You go fais do-do, little girl,” she said. “Adults are talking.”

“Stop that!” Mama snapped, shaking her finger at Miz Katrina. “You’d better cool it, Miz Thang, because if I don’t see a big change in your attitude in the next few days, I’m going to have to find you a new home.”