Dahlia Tells All: The Barn Cat

Well! Now that I’ve recovered from the horrors of last week’s so-called gift, I guess it’s time to get back to writing my autobiography. Barking Man never did thank me for saving his baby goats’ lives, although Screaming Woman did send some yummy, delicious chicken home with Mama, and that pretty much made up for Barking’s complete failure in the etiquette department.

Spring was upon the farm! The grass was green, and the new goatlings were bouncing around and playing in the fields as their mothers chewed their cuds and chatted about the latest gossip. That was how I found out that Ping the Goose was seeing Lucky behind Yang’s back! I’d heard Yang, one of the lady geese, complaining to a pair of chickens that Ping never came to see her while she was sitting on the nest. Although the chickens clucked their commiseration with poor Yang’s misery, they just went and gave the same affectionate ear to Lucky when she complained about Ping’s dalliances. The difference was that Lucky knew Ping was messing around with Yang, and she spent a lot of time honking miserably about how Ping didn’t want to be her life-mate, and it was all because of her gimpy leg.

Of course, as soon as the chickens left, they just shook their heads and said they couldn’t believe the pair of them were such drama queens! One gander, two geese — what exactly did they think was going to happen? After all, Ping has goslings by both of them because exactly the same thing happened last year! Did Yang and Lucky seriously think that philandering gander was going to change his ways?

“At least we know better than to have any romantic expectations about the roosters!” said one of the chickens. “It’s all wham, bam, thank you ma’am and hopefully you’ve got some feathers left on your back when it’s over!”

But the geese weren’t the only ones suffering the slings and arrows of outrageous animal fortunate. We had our struggles, too: A Strange Cat had taken to hanging out behind our little apartment!

Thomas tried to reassure me. “Oh, that’s just Sasha,” he said. “She was here when I got here.”

“But she’s mean to me!” I cried. “Every time I go out to watch the mice playing, she hisses at me and calls me names!”

“I’ll have a talk with her, Dahlia,” Thomas promised me. “You just stay inside tonight and snuggle with Mama — she could use some extra snuggle time today anyway — and I’ll see what I can do about the situation with Sasha.”

Well, sure enough, Mama let Thomas out to do his nightly rounds and I curled up in Mama’s arms to watch an awesome movie about giant cats — did you know there are black cats that are 20 times as big as me? — and get some delightful petties. I tried to focus on those great huge black cats, but I couldn’t help overhearing Thomas and Sasha’s conversation. 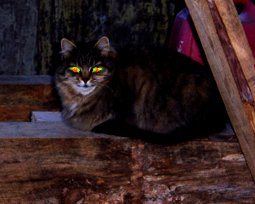 “NoooOOOooo,” she growled. “That little [ooh! swear word!] is crawling around my barn, and I won’t have it!”

“Dahlia lives here too, Sasha, and I’m asking you to be kind to her. There’s plenty of room here for all of us cats.”

“No! This is my barn! You should be glad I let you skulk around in here without kicking your tail, too!”

“Well, if you’d ever bothered to catch any of the rats in here, I guess I would have left well enough alone …”

“Rats are for PEASANT cats! Noble cats like me don’t eat rats! They taste bitter and they’re stringy!”

“Peasant, huh?” Thomas said. “So who’s the one that eats that nasty, cheap cat food that costs 39 cents a pouch? At least my mama feeds me good food that doesn’t have stuff in it that makes my poop stink!”

I was starting to have a bad feeling about this conversation.

“If your food is so good, how come you’re out here catching rats all night?”

“Because a gentleman cat makes sure his humans are safe from disease-carrying vermin!”

“If you didn’t care about humans, you sure as [ooh! swear word!] wouldn’t be spending most of your time in that big house fawning in front of those House Humans to get your disgusting, pre-fab, so-called food!”

“DON’T MAKE ME COME OVER THERE!”

Then, all hell broke loose. Mama jumped off the couch (disturbing me in the process), threw open the back door, stamped her foot and clapped her hands, and yelled “STOP IT! RIGHT NOW!”

Sasha and Thomas’s footsteps skittered through the darkness in opposite directions, leaving nothing but dust motes and a destroyed piece of glassware in their wake.

She squinted into the darkness for a few moments, and just as she was about to close the door, Thomas strode in, back legs stiff and tail held high.

As we snuggled together on Mama’s lap, Thomas gave me a gentle lick on the ear. “I did my best,” he said.

“That’s all right, Thomas,” I purred. “It’s obvious that cat can’t be reasoned with.”

“Don’t worry, Dahlia. If you want to come out at night, we’ll stick together and I’ll protect you, no matter what!”

With a contented sigh, I rested my paw on his shoulder and fell asleep while the giant black cat on the TV stalked its giant food.