Dahlia Tells All: Strange Stuff from the Sky

As the days continued to get colder, Thomas and I kept snuggling together as our undercoats grew in and finally started to protect us from the increasing chill in the air.

Even though Siouxsie never snuggled with us, she kept herself warm in her own way: when she napped, she burrowed under the covers of Mama’s bed and curled herself up on a nice, warm, soft pillow. This made her a lot nicer because her hips hurt less when she was warm. Sometimes she even let me get near her — as long as I stayed on top of the covers, that is.

Then, one weekend (Thomas taught me that word; he said that’s what you call the times when Mama was home all day for a couple of days in a row), Mama started moving the furniture around. She went out into the Back Room and came back with bags full of weird plastic-like stuff and rags, and then she opened the little vent under one of the windows.

“Why is she opening those?” I asked Thomas. “It’s freezing!”

Mama started stuffing plastic stuff and rags into the vent holes. Then when she was done, she closed the vent cover back up and put towels over it.

“Hey, the wind isn’t blowing so hard through those holes anymore,” I said.

“That’s right. She’s trying to get this place as tight as she can.”

Mama went to the other window, the one by the bed, and repeated the procedure. After she finished, she hung two big blankets over the window and secured them with thumbtacks and nails.

“There goes my favorite sun puddle,” Siouxsie said with a long-suffering sigh. She stretched and tucked herself back under the blankets.

“I’m sorry, Siouxsie,” Mama said. I’d like to have light and sunshine, too. But I’d freeze to death if I left that window uncovered.”

I have to admit that once Mama finished buttoning up our little apartment as best she could, the tiny heaters did do a better job of taking the chill out of the air.

Then we heard a familiar sound. I jumped up onto the kitty condo, which was by the window that still let light in, and saw Barking driving his growling tractor up the driveway. He parked it next to Mama’s car, hopped off, and clomp-clomp-clomped up the stairs. He threw the door open and said to Mama, “Are you ready?”

“Sure enough,” she said as she pulled on her wool coat, bright-orange hat, and leather gloves. They tromped back down to the ground and walked together back around and behind the house.

I was dying of curiosity! What was going on out there?

Well, finally Mama came back up the stairs. As soon as she opened the door, I ran out between her legs, down the stairs, and around the corner. There I saw Barking and Screaming sitting down on tree stumps with cups of coffee — and a giant pile of tree parts! Apparently Mama and Barking and Screaming had been breaking trees and stacking them in long, neat rows. There were still a lot of broken tree parts in the willy-nilly pile on the ground, but it sure looked like they’d done a lot of work so far.

Mama rejoined Barking and Screaming and took a long sip of coffee from her steaming cup. “They say we’re going to get eight to 10 inches,” Barking said. “We’ve got to finish this up today if we want to be able to find this wood by tomorrow evening.”

“Well, I guess we’d better get back on it,” Mama said.

“I’m going to put the roast in the oven and then I’ll be back out to join you,” Screaming said. She got up stiffly and walked into the house, where she was greeted by fevered barking. “Shut up, Dougal!” Barking barked. “Dumb-ass dog.” He put his gloves on, set a tree part on the stump where he’d been sitting, picked up a giant metal wedge attached to a long handle, and whacked the tree part with it. The log broke into three pieces that went flying off in three different directions — and one of them was coming right at me! Oh, so that’s what makes those thump-splinter noises! I thought as I ran for my life.

I looked back to see Mama picking up big armfuls of broken tree parts and setting them on top of a half-built stack.

Mama came back inside a while later and put some kibble into our dishes, and then she left again. She didn’t come back again until several hours later. And when she did, she smelled like wine and meat and she was acting kind of silly.

She put her bed-fur on and climbed under the covers, and we all snuggled up next to her with a happy purr.

Well, the next morning I woke up as soon as it was light out. I made my rounds quickly and when I got to the window I stopped and stared.

There were fluffy white things falling out of the sky!

But I couldn’t go back to sleep now. This was just too weird and amazing! I hopped up on the bed and trilled in Mama’s ear.

She didn’t seem to hear me, so I trilled a little bit louder. Still no response.

Well, I thought, I guess this is going to require more extreme measures.

I trilled and poked her face with my claws. Gently, of course.

“Oh, for heaven’s sake,” she said. With a sigh, she sat up and pulled the covers away, being careful not to disturb Siouxsie, of course. Once she got her robe and slippers on, I trotted to the window and did my cutest sashay, waving my tail in the air and uttering my most persuasive trill. 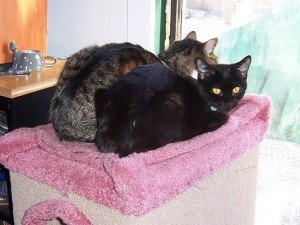 “Look! It’s snowing!” Mama said. “Oh, Dahlia, it’s your first snowfall! How exciting!” She turned the gas heater on, prepared our breakfast — which, of course, roused Siouxsie and Thomas right away — and started some water heating for her own first meal.

As soon as I was finished eating, I ran to the door and rubbed my flank against it. Mama obediently opened it and Thomas and I trotted down the stairs.

Ooh, I danced and played and tried as hard as I could to catch the snow in my paws. But every time I got ahold of a snowflake, it turned into water before I could eat it. “That’s not fair,” I said. And still I tried and tried … until I realized that my whole head and back were covered with snow that was turning into water and making me feel quite chilly.

I shook off as much of it as I could, and then I ran back up the stairs and told Mama I wanted to come in. Being the good Mama she is, she opened the door right away. As soon as she sat down, I jumped into her lap and used her robe to wipe most of the wetness off my fur.