Last night I was snoozing quietly, getting ready to dictate the next chapter of my memoir, when a horrible thing happened: The sky split open!

The darkness tore apart and some unseen machinery of doom sent sparks and daggers of blinding light in a thousand different directions. And the horrific roars and shrieks and tearing sounds literally shook the walls of my house! It would have stricken gut-wrenching horror into the heart of even the most stalwart of cats.

And the worst thing of all is, it started while Mama was sleeping. She just snored away, lost in her own little nocturnal world while the thunder got louder and louder, and the rain got heavier and heavier, and the lightning got more and more frequent.

I was crouched at the foot of the bed, my entire body a-tremble and my whiskers drooping miserably. I wanted to run away, but as hard as I tried I just couldn’t get my paws to move.

Thomas was right next to me. He was determined to be brave, but in the almost constant flash of the lightning I could see his ears pinned back and his chest heaving in fright.

Siouxsie played it cool. She scoffed at the thunder, hissed at the lightning, and twitched her tail at the raindrops that occasionally flew in through the windows. But I could tell that even she was starting to get tense as everything got noisier and noisier.

Then … then — I shudder even thinking about it — I heard the loudest noise ever! I thought the very earth was splitting down the middle and the house was going to fall down around me! And a whole bunch of things happened in the same second.

My mind finally went into FLEE mode, and I rocketed off the bed.

Thomas took off, hot on my tail. We raced for cover under the sofa, but we ran into each other and tumbled and scrambled our way as close to the wall as we could.

Even Siouxsie ran! Her claws skidded on the floor tiles and she swerved and swayed as she fled … but she quickly caught up and joined us in the deep recesses of the under-sofa cave.

And all of that happened before Mama could even cover her ears against the deafening roar that echoed through the storm-tossed night.

When I saw that Siouxsie was shaking as hard as we were, I knew it was bad.

Siouxsie’s just about the bravest cat I’ve ever met (don’t tell her I said that; it’ll go right to her head!) so when even she was terrified I was sure the world was about to end.

But I was confused. If the world is about to end, I thought, why isn’t Mama hiding under the sofa, too? I didn’t want to die without being snuggled next to my loving, wonderful human. I needed her reassurance! Would all my remaining lives be ripped away from me at once, or would it be a slow and painful draining until finally I reached the end of the final one of the nine glorious lives that were my birthright?

One look at Thomas told me the same thoughts were going through his mind. I overcame my shock-and-fear paralysis and crept over to him, curling up in the warmth of his fur. He gave me a reassuring lick.

In the flickering lightning, I noticed Siouxsie, who had been crouched as far away from us as she could get and still be under the couch, had tears rolling down her face.

“Siouxsie,” I whispered. “You can come and snuggle with us if you want.”

Thomas gave her a sharp look. “Now you’re just being silly. Come on over here and share whatever comfort we can give each other.”

“Do you promise you won’t chase me?” Siouxsie asked.

“I’m not getting out from under here until this horrible storm ends!” Thomas said. “If it does end before I flee my body.”

“Okay,” she said. She slunk over to us and we curled together with our heads on each other’s chests, trying to sleep with the sound of a terrified cat’s pounding heart in one ear and the storm’s hideous cacophony in the other.

Time passed, and eventually we realized that the world was getting a little quieter and we hadn’t died.

Then lights started coming on as Mama went around the house closing windows and sopping up the rain that had soaked the window sills. I stuck my head out from under the couch when I heard her coming, but as soon as I was going to ask for a pet on the head to let me know everything was okay, another skull-rending boom split the night and I fled to my refuge again.

Once Mama had climbed back into bed, Siouxsie followed her there and cuddled up under the blankets. I guess she found more reassurance in Mama’s arms than she found in the paws of her fellow felines. Humph!

The storm kept on going and going, and even in spite of Thomas’s reassurance I couldn’t relax in the face of all that noise. Anyway, as you can imagine I didn’t get a wink of sleep! I was so relieved when Mama woke up because I really, really needed some Mama snuggles. But every time she made a sudden move, even if she was saying quiet, nice things like, “Awww, come here, little kittenface; it’s all right,” I got so scared I ran away. I thought I was going to cry!

And I knew she could. Mama can fix anything!

She went into the bathroom and came out with a tiny little bottle with a yellow label. After she twisted the top off, she approached me on her hands and knees, going slow and reassuring me. I was still scared, but in my internal war between the “Mama will make it all right” reflex and the “Run for your life” reflex, Mama Will Make It All Right won. 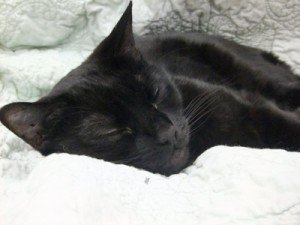 Oh, I felt so much better after Mama gave me the Rescue Remedy!

Mama put a tiny drop of the liquid from the bottle on the tip of her finger and rubbed into the fur on the top of my head, right between my ears. And even though the stuff smelled just awful, I let Mama put it on me in because I could feel myself starting to relax even when I got my first whiff.

It was only a few breaths before I started to feel like myself again. I rolled over on my side and gave myself a good, long stretch as I sighed and purred with relief.

“Aw, Dahlia, it looks like the Rescue Remedy is doing its job,” Mama said as she stroked me from the top of my head to the tip of my tail.

And as Mama ate her breakfast and tippety-tapped on her computer keyboard, I fell fast asleep.

See the rest of the story | Next chapter