Dahlia Tells All: Mama Figures Out My Name

Once I finally worked up the courage to show Mama that I’m a girl kitty, I set to work helping her figure out what my name is. Trust me when I tell you, that task isn’t nearly as straightforward as it might seem.

A very wise old possum once said, “The Naming of Cats is a difficult matter.” Now, I don’t know how that possum came to have such insight into the innermost nature of cats, but he definitely nailed that one!

A lot of humans think it’s fine to give their cat a name that describes what they look like. That’s why the Shelter People called me Blackie, after all. But a perceptive person can figure out that a cat should properly be named after qualities much more subtle than the obvious nature of her physical appearance. After all, how would you humans like to be called Fat or Stretch or Blondie or Brown?

I was fortunate that I had chosen one of these more perceptive humans. I could tell, not just because the other cats in my new home had such wonderful names but because even the boy name she gave me was pretty interesting.

She knew I liked the “D” sound at the beginning of my boy-kitty name, so she started from there. She knew Doris and Dottie and Daphne and Drusilla wouldn’t do. Similarly, she eschewed Danielle, Daria, Doreen and Darlene. As her thoughts wandered through the multitude of girl-names, she finally hit on Dolly. Oh, it was so close! And it was the use-name of my beloved granny-cat friend from the shelter! I purred and rubbed against her hand to let her know she was on the right track.

Well, of course I do! I said. I love Dolly! But that’s not my name.

Oh, perfect! I squeaked. I trilled with joy and purred even louder! I knew she was pretty clued in, but how could she possibly have known that we cats honor our favorite ancestors by adding the ‘a sound to the end of their names?

Clearly Mama must have known about that old possum’s words of wisdom: a cat should have a name that the family uses daily — and preferably one that’s not entirely ordinary — but:

I tell you, a cat needs a name that’s particular,
A name that’s peculiar, and more dignified,
Else how can he keep up his tail perpendicular,
Or spread out his whiskers, or cherish his pride?

Having a firm grasp on this relatively rare understanding about the feline species, Mama opened up her mind and looked into my heart. “Dolly’a, Dolly’a, Dolly’a,” she chanted as she stroked my shoulders. ” … my Dolly’a P. Kittenface.”

I couldn’t help it, I just fell into throes of ecstasy. I turned my head upside down and squirmed around like a newborn searching for her favorite spot at her mama’s milk bar! Not only had she found a wonderful name that honored my beloved Dolly, but she’d added a sweet little suffix, too.

I tell you, I felt like just about the luckiest kitten ever to walk the earth. Thomas came up and congratulated Mama for her discovery, then he gave me a lick on the ear.

Even Siouxsie said Mama had done a reasonably acceptable job. But you still smell like poo, she told me, so don’t expect to get all snuggly with me!

Fine! I said. Then I buried my head in the crook of Mama’s elbow for comfort.

“Siouxsie, be nice!” Mama said. “You were a kitten once, too, you know. And I don’t think I need to remind you that your poo doesn’t exactly smell like roses, either.”

Stinky little poop-smelling kitten! she groused as she stalked over to the bed.

“Oh, sweet Dahlia,” Mama cooed. And as she shared a mind-image of a beautiful yellow-orange flower with tons and tons of tiny petals on it, I realized that she hadn’t given me this name because she was honoring my Dolly. She’d named me after a flower!

Well, so she thought, anyway. I knew the truth. And somewhere deep within her soul, Mama did, too.

But there was one thing Mama didn’t know, and that I’ll never tell her, and that’s my One True Name, whispered only to me by the Goddess Bastet as I drew my first breaths. 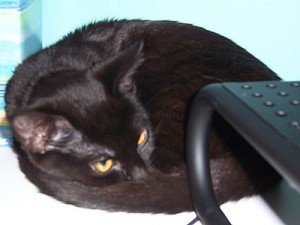 Here I am, contemplating my ineffable effable Effanineffable Deep and inscrutable singular Name.