Dahlia Tells All: Horror Upon Horror!

I hope you’ll forgive me for bringing this week’s chapter to you late. It’s just so traumatic … I have all I can do not to break down in hairball-horking, wretched, tearful terror when I think about it. So I’m going to make this as short as I can. Thomas is here grooming me and whispering sweet purr-songs in my ear. But it’s still hard. *sniffle*

So, as you recall, last week I told you about the hole I licked into my tummy because I was so itchy, and the shame I had to endure while wearing that giant plastic cone thing around my head. And worse yet, Doctor Sarah threatened that the hole might not heal without further intervention.

I didn’t know what that meant at the time, of course. But what I did know is that every time I tried to do anything, that *hissss-spit-grooooowwwwl*ing Cone of Shame made it just about impossible. And to make matters worse, Mama was holding me down, forcing my mouth open, and pushing some kind of nasty, bitter thing so far back in my mouth that I had to swallow it! I couldn’t have spit the darn thing out even if I’d wanted to!

“What have I done to deserve such abuse?” I cried to the Cat Gods. “I’ve been a good kitty, so why is Mama being so horribly mean to me?”

They greeted my entreaties with a cold silence.

Oh, of course, Thomas tried to make me feel better, but he was starting to get pretty perturbed too: every time he tried to groom my ears, that darn collar got in the way! Once he even swatted me because the cone twisted his whiskers the wrong way. And if you’re a cat, you know just how awful it feels to get your whiskers twisted the wrong way!

(I’ve seen Mama cussing and letting her eyes leak when she hits her Funny Bone, and I imagine that when you humans hit your Funny Bone, it feels a lot like whisker-twisting feels to us.)

Anyway … Mama did her best to console me, too. She even took the Cone of Shame off me when she was awake and in the house with us. “As long as I’m here and I can make sure you don’t lick and nibble at your tummy, you can go cone-less,” she told me. “But I’m afraid I have to put it back on you when it’s time for me to go to work or go to sleep.”

And then, a few days later, Mama called … she called … *sniffle* she called the vet and said the hole in my tummy hadn’t gotten any smaller. And then I heard her say … *sniffle* … “So I’ll be bringing her in for that appointment we set up.”

Then she grabbed me before I could even figure out what was going on, and … and … *choke* … shoved me into that awful portable … portable prison!

I cried and cried, and wailed and wailed! I screamed my despair as loudly as I could! I even made a big, stinky mess in my prison box! But did Mama stop and take me back home? NooOOOOoo!

How could the person I used to love and trust so much commit such hateful atrocities against a tiny, helpless, three-pound slip of a kitten who had done nothing but give her purrs and head-bonks and whisker-tickles?

Then we arrived at the gulag. The barking and howling of gigantic dogs in the back room made me so scared I wet my crate again! But Mama took me out and held me gently as we waited in the exam room for Doctor Sarah. I was trembling so hard I could barely breathe. My paw pads were oozing sweat and my heart was racing so fast I felt light-headed and woozy.

When Doctor Sarah finally came in, Mama had to unhitch me, claw by claw, from her sweater in order to set me down on the table.  “Poor thing, she’s so scared she’s shivering,” Mama said.

“What a good, brave girl,” Mama said as Sarah lifted me up to look at my belly.

“Well, I was afraid of this,” Sarah said. “I’m going to have to cut the edges of that wound and stitch them back together. I’m sorry, little Dahlia.” She stroked my head.

“So when should we do it?” Mama asked.

“I’d set aside a few minutes today because I suspected this would happen. So if you want to leave her here, you can pick her up on the way home this afternoon.”

“Okay. I didn’t feed her this morning because I noticed the wound wasn’t closing and I thought you might say that. I don’t want her running around the farm with an open wound that isn’t healing.” 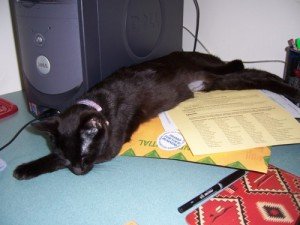 And once again, I was forcibly removed into the bowels of the clinic where I awaited my fate, hunched in the back of my cage and shaking with terror, as the bloodthirsty baying of dogs and the screeches of half-feral barn cats swirled around me.

That’s … that’s the last thing I remember *sniffle* before Mama came to take me home.

Now I’m going to curl up in a tiny little ball and *sniffle* cry for a while until … until Mama gets home!