That first snowfall was really exciting and fun for me! I spent lots of time on the cat condo looking out the window and watching the flakes fall out of the sky and dance in the wind. And then the next one came pretty quickly after that. In fact, this snow business became a pretty regular phenomenon.

Thomas explained to me that this was winter, and that it was always cold and snowy in the winter. But he told me there was something really wonderful about winter time: Fangs Giving and Crisp Mouse.

“Just wait and see,” he told me. “Fangs Giving is an amazingly awesome time to be a cat!”

“Siouxsie, will you tell me what Fangs Giving is?”

“Nope! You’re gonna have to learn for yourself, just like all kitties do.”

Then a few days later, Mama didn’t get out of bed on a day when she was supposed to be at work. I poked at her and bumped her with my head, but she still wouldn’t get up. “Dahlia,” she said, “it’s a holiday. I don’t have to get up.”

“Oh, okay,” I said. “I guess that means it’s time to snuggle.” I dug myself a little nest under the covers and curled up next to Mama until Siouxsie and Thomas started yelling “I’m hungry! I’m cold! It’s breakfast time, I’m hungry! Please turn on the heat!”

Later on that day, Mama went over to the Big House. She spent a lot of time there, and every time she came back she smelled like really delicious food. “You’re gonna get some yummy treats later,” she told us.

“Today is Fangs Giving,” Thomas whispered in my ear. His stomach rumbled in anticipation. “Now you’re going to see what it’s all about.”

Well, sure enough, Mama came home pretty late, but she was carrying a plate that was full of tasty treats that made me want to jump up on the counter and steal them right out of her hands! All three of us cried and danced and carried on as Mama filled our dishes, and soon I was munching away on some of the most delicious-tasting bird meat I’d ever known! I loved it so much I started saying “nyom, nyom, om nom nom nom” as I ate and I growled if Thomas or Siouxsie looked at me.

Later, I found myself feeling extra-super-tired and very comfortable. I curled up next to Thomas with a purr and said, “You’re right, Thomas. Fangs Giving is the greatest time to be a cat!”

“Just wait until Crisp Mouse,” he said. “’Cause that’s even better!”

Well, I had no idea how a silly old Crisp Mouse could ever compare to Fangs Giving. I loved bird meat, but I wasn’t quite so fond of mouse. Mice are stringy little things, more fur than meat, and they smell weird!

But then the weirdest things started happening! First, Mama took a long walk in the woods with Barking and the human kittens. She came back with a tree that she brought into the house, and then she stood it up in a metal thing and started covering it with little lights and shiny glass balls and garlands that looked like the icicles hanging outside the windows. Oh, it was beautiful and dark green and smelled like snow and sap. And I just couldn’t help myself: I had to bat at some of those shiny things! Sometimes I made them fall off and then I could chase them around the floor for hours.

Then Mama came home with bags full of stuff that she hid in the cabinet. And then the next day she came home with rolls of pretty, shiny paper. And then it got even better: She unrolled the shiny paper and started wrapping it around the things she brought home.

I did my best to help, of course. I swatted at the paper and jumped on top of it so it wouldn’t roll up while Mama was trying to work, but for some reason she didn’t seem to appreciate my efforts and kept pushing me away. So then I decided it was time to help with the ribbons and bows. Those sparkly things needed even more playing with than the paper, so I rolled out the ribbon until there was a nice long piece of it on the floor, and then I chased and batted it and pinned it down just like a little snake in the grass. Since I was playing Snake Catcher, I had to grab that ribbon every time Mama picked it up and make sure the snake wouldn’t bite her!

“Strings are not for kitties,” Mama said sternly. “You can get really sick if you eat strings and ribbons.”

“Thomas, is that true, or is she just saying that to get me to stop playing Snake Catcher?” I asked.

“It is true. We’ve seen real cats that ate string and rubber bands, and they had to have their tummies cut open so the vet could take the string out and save their lives.”

“But I can play Snake Catcher without eating the string!”

“I know it’s hard,” Thomas said, “but do try to let Mama finish her business. I know she’ll play with you when she’s done.”

Then a couple of weeks after that, Mama got to sleep late on a work day again and wake up in a nice, slow, kitty-petting lazy way. Around mid-morning, Mama took out some small wrapped boxes. 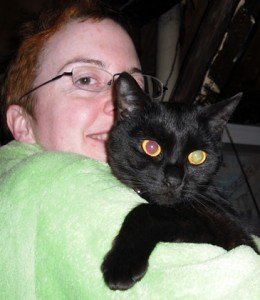 Mama says I've got Crisp Mouse Eyes in this picture!

“Merry Crisp Mouse, Siouxsie,” she said as she put one of the boxes in front of her.

“Merry Crisp Mouse, Thomas,” she said, putting another box in front of him.

“Merry Crisp Mouse,” Dahlia,” she said. I sniffed at the box she laid in front of me. It didn’t smell like anything but cloth and cardboard. But still, it was a box. I pawed at it a couple of times. The suspense was killing me!

Mama opened each of the boxes and presented us with our very own special toys! Then she opened a drawer and I smelled something really, really delicious!

Siouxsie and Thomas stopped investigating their toys and we all ran over to Mama and wound around her feet, crying and begging, until she tossed squares of delicious dried fish meat to us.

Well, this Crisp Mouse was off to a pretty good start!

Soon, Mama went down to the big house with her bags full of wrapped things and cars started arriving. They were all saying “Merry Crisp Mouse” to each other and hugging each other and everybody seemed super-duper happy.

Later on, Mama came back to our little apartment with her bags full of new things (which, of course, we investigated thoroughly) and more tasty human food. This Fangs Giving and Crisp Mouse thing was just as wonderful as Thomas had promised!