Dahlia Tells All: Exploring the Farm

I know that in the last installment of my story, I went into a realm that’s a bit strange and possibly disconcerting for many humans. Honestly, those things are just an ordinary part of life for us cats. But regardless of all that, I was still a kitten and I still wanted to play and run and bat Siouxsie and Thomas’s tails.

I spent many days staring out the window watching all the amazing things happening in the yard and wondering if Mama was ever going to let me out to explore my new territory. Every day a man and a woman spent their day around the yard doing chores. Because of the way they talked, I decided to call them the Barking Man and the Screaming Lady.

There were three dogs who lived at my new home, too. There was a really old white one who limped sometimes. I liked her. Her thick, fluffy fur reminded me of Mama Dog. The other two, a giant yellow thing with a black nose and drooly lips, and a fat brown barely-a-puppy one with short legs, barked and whined constantly whenever they were outside because they had to stay on a chain. I saw why one day when the door of the house opened and the two of them rocketed out the door and straight down to the road with the Barking Man and the Screaming Lady hot on their heels, while the youngest of the Small Girls stood by the greenhouse and giggled and the older ones took a path around the back of the hill in a flanking maneuver.

Finally, one morning Mama opened the door — and left it open long enough for me to go outside with Thomas and Siouxsie.

Siouxsie decided she just wanted to sun herself in the last warm light of the fading autumn. She stretched out on the top step of the steep flight of stairs that led to our little home, while Thomas and I descended to the ground.

Oh, the feel of the earth under my paws! I chirped with surprise as the damp grass chilled my pads and moistened the fur on my feet.

“Come on, Dahlia, let me show you around!” Thomas said. “There’s so much cool stuff here.” He trotted off across the yard, climbed over a pile of scrap metal, and finally sat down next to a towering willow tree next to a strange house that looked like it had been buried in the ground with only the top part sticking out.

I licked some red metallic grunge off my feet and looked around in awe. There were a whole bunch of birds with red and black feathers pacing around the yard.

“Those are the chickens,” Thomas said. “Don’t hunt them, or else the Screaming Lady will yell at you. And then she’ll yell at Mama, too.”

Bug-bug-bug-bug … worrrrrrm, they said as they poked at the ground with their beaks.

“Nah. Just really dumb. That’s all they ever say.”

“Those are the geese,” Thomas said. “They’re really mean, but they won’t bother you as long as you leave them alone. And watch out for the gander. He’s the white one, and he’s the worst of them all.” 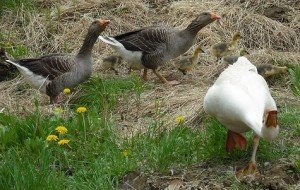 “Hi, geese!” I said. Disregarding Thomas’s warning, I trotted up to the flock with my tail in the air.

Stop! Stop! Stu-STOP! STOP! STOP! they said, and the giant white goose lowered his head and hissed — in the most horrifyingly evil hiss I’d ever heard — STAY AWAY FROM MY WOMEN OR I’LL BREAK YOUR NECK!

Well, I got all fat-tailed and ran back to Thomas as fast as my paws could carry me!

“I told you: Keep your distance from the geese.”

I sat down for a moment and had a bit of a wash to calm myself down. Once I’d finished cleaning my face and ears, Thomas said, “Let’s go around the barn. There’s a lot more to see there!”

We made our way across the half-frozen mud in the driveway and into the stiff remains of the summer’s tall grass. In a nearby pen from which an absolutely terrible stench emanated, several fat, naked creatures were eating piles of wilted vegetables and almost-gone-by human food leftovers — and stomping at least half of it into the ground as they smacked and slobbered.

“Those are the pigs,” Thomas told me. “They’re huge and they can be dangerous if you get too close to them. But they are smarter than they sound.”

TREEEAT! TREAT-TREAT-TREEEEAT! the cry went up from the other pigs and they scrambled and dug and pushed each other aside to get whatever bits of tastiness were left.

“Don’t blame ya,” Thomas told me. We kept walking until we reached a clearing near the edge of a long, long set of fields. I’d never seen any place so huge!

“What’s down there?” I asked, cocking an ear toward the farthest reaches of the farthest-back field.

“Things that eat cats?” I asked.

“Yes, things that eat cats. That’s what happened to Sinéad. She got caught by coyotes and they ate her up.”

I thought I heard a little hiccup in his voice as he spoke.

“I’ll never go down there! I promise!”

“You’d better not. Just stay near the house and the barn, and don’t go into the woods. The dogs keep the coyotes away from here.”

“What are those?” I said, my eyes wide open as I stared at a bunch of animals that looked like white barrels on stilts.

“Those are the goats,” Thomas told me. “They’re nice, and they appreciate it when we kill the mice that get in their hay supply. Let’s go meet them.”

I started trotting across the field.

“Slowly,” Thomas said. “They’ll run away if you go too fast.” 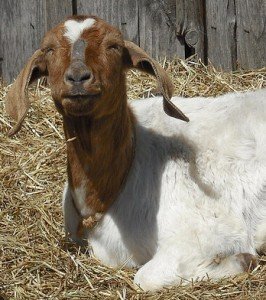 I followed Thomas’s lead until we were both pretty close to the tallest and friendliest of the goats.

“Dahlia’s still a little young for catching rats,” Thomas said. “But I’m going to teach her how to take care of the mice and shrews and voles.”

It seemed like we’d been out walking around for days and days, when finally Thomas said we should go back to the house. It was definitely time for a nap!