I was so happy that I’d found my person! Unless you’ve been in a shelter, you can’t really know how wonderful it feels to know you’re finally going home, that a family wants you, that you’re going to have your own special warm spot and you’ll be able to snuggle with your person whenever you want to …

Oh, my eyes were just about to start leaking as Mama took me to her office and replaced the plastic band the Shelter People had put around my neck with a special red necklace that had a tiny little bell on it. I spent a few minutes sniffing and skulking around the office, and then I jumped around and the bell jingled! It was awesome! I wanted to jingle all the way home!

Had I known that my journey to my new home would involve another long trip in a growling, moving box, I might not have been so excited about it. But I put up with it because Mama was right next to me, talking to me and sticking her fingers through the bars on the end and petting whatever parts she could reach.

I almost danced as my fur fluttered in the air blowing through the open car window. No longer was my nose filled with the metallic tang of noisy streets and the suffocating half-smoky smell of the Copy Shop. Instead, I smelled salt and heated rocks, sweet pine needles, and the crisp spiciness of fallen leaves.

But I have to admit, I did do plenty of crying and wailing at the injustice of being trapped in that tiny box.

Just when I’d finally curled up into a comfortable napping position, the car slowed down and stopped. Mama got out of the car, picked up my box, and suddenly she was clomp-clomp-clomping up a set of steps that squeaked and shook as we moved. She pushed the door open and we went inside.

I knew this place was going to be heaven. I smelled mice everywhere!

Mama put my box down on the floor and two grown-up cats approached me. I backed up a little bit as the black one glared at me and gave a disparaging sniff at the corner of my box. But the other one, a handsome tabby fellow, was just the opposite.

Hi there, he said as he gently touched his nose to the wire grate separating us. Would you like to be my friend?

I came a couple of steps closer and rubbed my head against the end of his nose. Of course I would! I said.

Mama calls me Thomas, he said. You can call me that too, if you like.

What a wonderful name! I told him. Those darn Shelter People just called me Blackie.

Don’t you worry about that, Thomas said. Mama will listen to you and try to figure out the name that suits you.

Really? You mean humans do that?

Some do, Thomas told me. We’re lucky because we found a person who really wants to talk to us.

“Well, Blackie,” Mama said. “Would you like to come out and have a look around?”

I stuck my paw between the wires of my cage door, and Mama knew exactly what I meant. She did some kind of magic and the door popped open.

Thomas and I got right down to the business of making proper introductions: nose taps, butt sniffs, and a short and not-too-serious game of batty-paws.

Stinky little kitten! Siouxsie groused from her perch on top of a table.

I’m not stinky! I cried. I’m nice and clean and I smell just as good as you do!

Don’t worry about Siouxsie, Thomas said. She’s just grumpy like that. He licked my ear reassuringly. 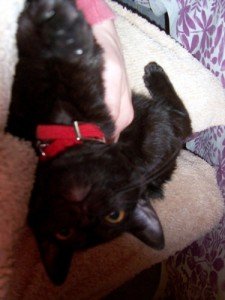 Right from the beginning, I loved sitting in Mama's lap!

Mama finally sat down and I jumped into her lap. Hi, Mama! I said. I like it here. And Thomas is really nice. Can I stay?

I hope she sends you back, Siouxsie growled. I hate you!

Why is she being so mean to me? I asked Mama as I buried my head in the crook of her elbow.

“Siouxsie, you be nice,” Mama said.

“Now, we’ve got to get down to the business of your name,” Mama told me. “You’re not just some ordinary little Blackie. What about … Black Jack Davy?”

I saw a picture in her mind of a dark-skinned human with balloony pants and a silk scarf tied around his head, with his arms around a woman who looked upon him with admiration and love. Hmm, that sounds sort of OK, I said. But I’m not a boy.

Then she sang a song to me: “Late last night when the squire came ’round inquiring for his lady … some denied and some replied, ‘She’s gone with Black Jack Davy …’ ”

Oh, how I loved the sound of her voice. I rubbed my head against her chest as hard as I could. Please keep singing, I begged.

She continued the song as she played with me and petted me, and I decided I liked the name well enough. For now.

But after a couple of days, I just couldn’t stand the fact that she still didn’t seem to know that I’m not a boy cat. So even though I was afraid she might send me back when she found the truth, I put on my Big Kitten Pants — and when she was eating her breakfast, I jumped up on the table in front of her and showed her my beautiful, clean bottom!

“Aww, you’re such a sweetie,” Mama said. “Don’t worry, it doesn’t matter to me if you’re a boy or a girl.” She picked me up and hugged me close, and I knew all was well.