Could my boy kitten have gotten my cat pregnant?

I adopted a 7-month-old stray in July and discovered she was pregnant. She had a litter of five on August 14th. We were down to our last two girls and one boy when the boy found his home last week. As soon as he left, the two girls and mom became much more social with my husband and me. I don’t worry about the girls, but last time mom was like this was when I discovered she was pregnant. I didn’t get her spayed right at 8 weeks post-labor because a couple of the kittens were still occasionally nursing. Is it possible that her 12-week-old boy kitten might have gotten her pregnant again? It’s really too soon for me to tell as she would only be about a week or two along, but she hasn’t been meowing recently as she has in the past few weeks and she is now super affectionate like she was last time she was pregnant. I know it’s possible for her to get pregnant now, but she hasn’t been outside. I just wonder if it’s possible for him to get her pregnant since he’s 12 weeks old. I hate the thought of her being pregnant again, especially by her own kitten.

Siouxsie: Ashlee, the good news is that there’s no way your 12-week-old male kitten could have gotten her pregnant. The bad news is, you’ve got to get your female cat spayed as soon as possible. And here’s why.

Thomas: The odds are pretty good that the little guy’s testicles haven’t even fully descended yet!

Dahlia: Male cats don’t reach sexual maturity and begin to produce sperm until they’re at least six months old. And then it’s another two months before the sperm cells are present in the epididymis — the tubules that hold the sperm produced by the testes — and the tomcat could fertilize an unspayed female.

Siouxsie: For a brief and understandable description of male and female cats’ reproductive systems, we recommend this page.

Thomas: So you can breathe a sigh of relief knowing that your kitty couldn’t possibly have gotten pregnant by your male kitten. But don’t wait too long after that sigh of relief to get mama cat to the vet for her spay. 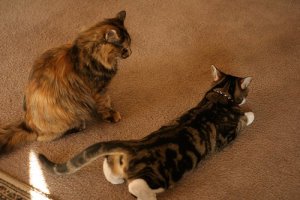 The cat on the right is showing the typical posture of a female cat receptive to mating. Image courtesy of Cats of Australia

Dahlia: Mama cat seems to be showing signs of going into heat again. Females in heat are consummate escape artists, and they can come up with ways you wouldn’t even have thought of to get out of your home and get their needs met.

Siouxsie: The first stage of heat is called proestrus, and it lasts one or two days. During this time, she may show an increase in appetite and seem a bit restless. She’ll also utter short, low calls and be more affectionate toward her owners.

Thomas: During this part of the heat cycle, visiting male cats’ pheromones can stimulate the female to produce even more sex hormones and go into full heat, also known as estrus.

Dahlia: Most cats in full estrus make a lot of noise. She’ll be even more affectionate, weaving between your legs, rubbing against you, shaking her pelvis, and rolling on the floor. Her cries will eventually seem like screams of pain, and then “her milkshake will bring all the boys to the yard,” so to speak.

Siouxsie: You can see if your cat is receptive to mating, hold her by the scruff of the neck and stroke down her back to the base of her tail. If she’s in heat, she’ll raise her butt, move her tail to the side, and tread up and down with her feet.

Thomas: Estrus usually last 4 to 10 days, but if she doesn’t get bred, the heat could continue for longer.

Dahlia: Vets can spay cats in heat — and they often do — but the surgery can be a little bit more risky because estrus causes an increased blood flow to the uterus and the tissues can be just a little bit more fragile.

Siouxsie: But don’t let that stop you from getting your cat spayed right away! I was in heat when I got spayed (Mama didn’t know better and waited just a little bit too long) and everything went just fine!

Thomas: Vets can spay pregnant cats, too. This naturally causes the death of the fetal kittens. Spaying while pregnant is extremely risky. This page will show you what a pregnant spay looks like and detail some of the risks — and the moral and ethical dilemmas associated with pregnant spaying.

Dahlia: So the long and short of this is that you need to call your vet today or tomorrow and make an appointment to have mama cat spayed!

Siouxsie: Oh, and by the way — vets can spay kittens, too. In many shelters, girl cats are spayed as early as seven weeks of age! This has been done for a number of years now, and research has shown that early spaying and neutering does not cause any long-term health problems for the cats in question.