What Color Was the Father of Our Kittens? 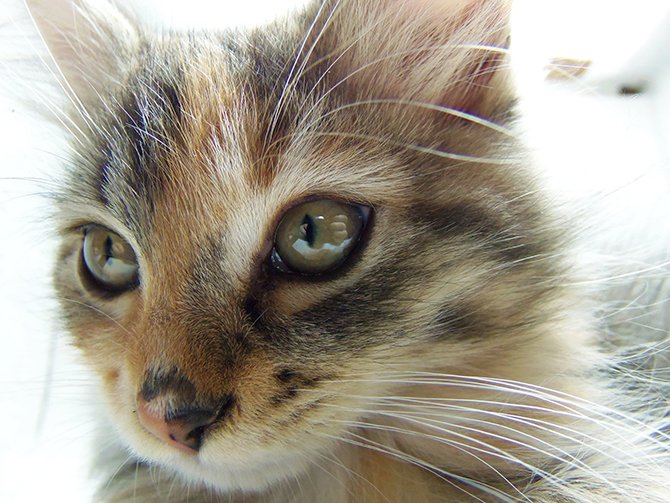 I’ve been doing some research on cat genetics lately and have started to question if all of my kitty’s babies came from the same father! Rhubarb is a stray that I took in after I noticed her roaming around our yard on a regular basis. She is a dilute calico, blue cream/peach and white. It wasn’t long before I realized Rhubarb was pregnant! The kittens had an easy birth and she was a great mother. But here’s the interesting part. I was under the impression that kittens can only inherit their color and pattern from their immediate parents and that there must be a dilute gene on both sides to produce a dilute kitten. If there is a dominant dense colored gene in the mix it dominates the single dilute gene and the kittens are born densely colored? This is just what I’ve gathered from my research but I could be wrong and this is why I’m emailing you and your lovely bunch! Rhubarb had five kittens, all of them female. One dilute calico the same as Rhubarb, one regular calico with visible tabby through her orange patches, one cream/dilute orange, one blue cream/blue tortie and one black/orange tortie. I’m just curious as to how Rhuarb has managed to have three dilute kittens and two densely colored!? I always assumed the father must have been cream especially to produce the cream female, but two dilute cats can’t produce densely colored kittens! Also, two of the five were quite long haired. The rest short haired. We still have Smokey Joe (the blue cream torti) and Mouldilocks (the regular torti); they turned three in September!  As you can see I’m at a loss. Please help!

Thomas: Oh, goody, this is our favorite kind of question! *rubs paws together*

Bella: Yay, we get to science this week! *purrrrr*

Tara: I’ve never scienced before. How do you do that?

Thomas: Just step aside, Tara, and we’ll show you how! Cat color genetics is one of our favorite subjects, and we’ve talked about it before. Check out our posts “What Color Was My Calico Kitten’s Father?” and “Are Orange Female Cats Really That Rare?” to learn more fun facts about cat color genetics.

Bella: You’re on the right track with your cat color genetics research, and we think we can take you a few steps farther down the line–and that we may even be able to tell you what the father cat looked like!

Tara: Oh, so that’s how you science!

Thomas: So, before we start, we’re going to give you a few important definitions. A gene is basically a series of nucleotides (A, C, G, and T) that forms part of a chromosome. A chromosome is a bunch of genes.

Bella: And most importantly for our discussion, an allele is one of two or more alternative forms of a gene that arise by mutation and are found at the same place on a chromosome.

Tara: And it’s these alleles that code for features like coat color and fur length. And these alleles play a huge part in cat color genetics.

Tara: But you can still have dilute colored kittens even if the father was densely colored, as long as he was carrying the recessive gene for dilute coloration.

Thomas: So the tom who fathered Rhubarb’s litter was densely colored, but carrying the dilute allele.

Bella: Now, for the next really interesting thing about cat color genetics: how calico and tortie coloration happens. 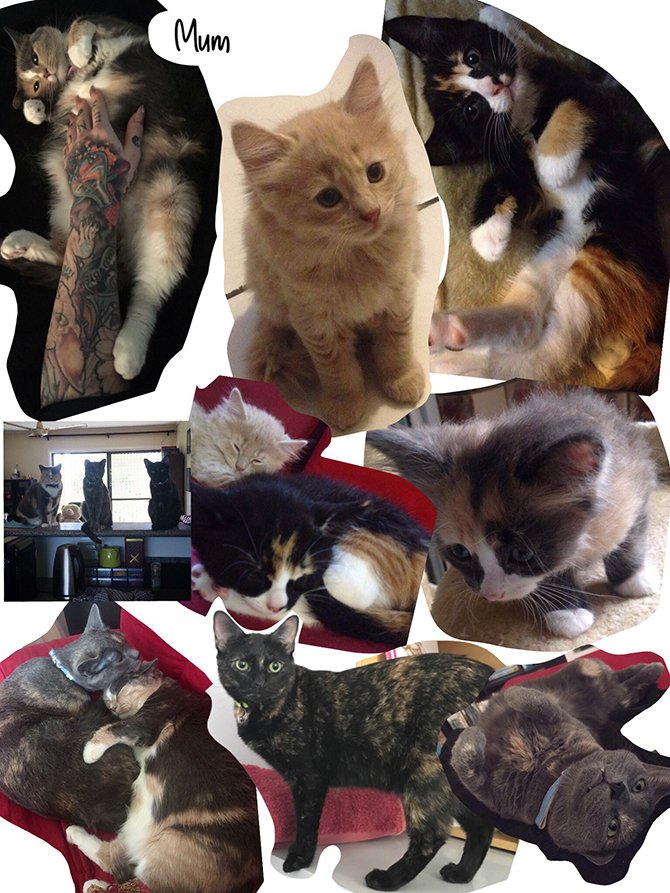 This is the photo of Jordan’s kittens. Don’t worry, they’ve all been spayed, microchipped, and they’ve found good homes, thanks to Jordan’s excellent care.

Tara: First of all, the coat color allele is carried on the X chromosome. A cat with two X chromosomes is female, and a cat with one X and one Y is male. Because of this, the color inheritance in male cats is pretty straightforward because male cats only have one X chromosome.

Thomas: But with females, it can get more complicated. A phenomenon known as X-inactivation is responsible for calico and tortie coloration. What this means is that in some cells, the black color allele will become inactive, leaving only the orange allele to express color. In other cells, the orange color allele becomes inactive, leaving only black coloration. Thus, in a cat with X inactivation, you’ll get calico and tortie cats because some of the furs will be black and some will be orange.

Tara: If two dominant white spotting genes are inherited, a cat will have white on more than 50 percent of their body. If a cat has one dominant and one recessive gene, then the cat will have white fur on less than 50 percent of their body. If she gets two recessive genes, there will be no white on the body.

Bella: Now, in the photos you sent, we see that some of your kittens have tabby stripes. The tabby striping is coded for by a different allele known as agouti. The agouti, or tabby, gene is dominant, meaning it only needs one copy of itself to create a tabby cat.

Tara: We also noticed that you’ve got one little orange creamsicle kitten in your litter. When you have an orange female kitten, that means she inherited one orange allele from her mother, the calico cat, and one orange allele from her father. Because male cats only have one X chromosome, we can assume that the father was orange. Otherwise, Rhubarb wouldn’t have had any orange kittens.

Thomas: And now we get to the super-fun part: Long fur versus short fur!

Bella: The dominant version of the fur length gene produces short fur, and the recessive version produces long fur. That means a long-haired cat carries two genes for long fur, but neither parent has to have had long fur for that to happen. If a cat has one gene for long fur and the other for short fur, the short fur gene, being dominant, will express itself in the cat’s coat length.

Tara: So that means your father cat must have been short-haired but carrying the long hair gene. The same thing is true for Rhubarb, who looks short-haired in the photo you sent.

Thomas: So, put all that information together, and we believe the father of your kittens was an orange or orange and white tabby cat with short fur. If you saw a cat like that around your neighborhood a few months before Rhubarb had her kittens, it’s most likely that he’s the father.

Bella: What do you think? Isn’t cat color genetics fun?

Tara: Do you have any other questions about cat color genetics? Or cat fur length genetics? Or any other cat genetics question? Please ask in the comments!