Now You Can Chat With a Vet on Paws and Effect 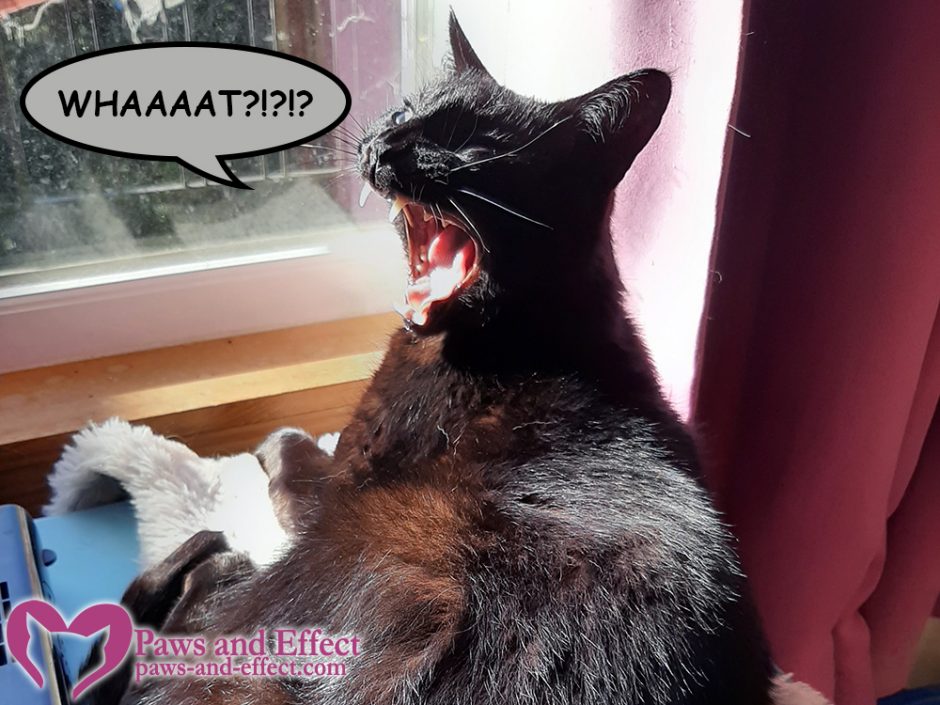 Yes, it’s true! Just check out the sidebar under “Chat with a vet.” Photo by JaneA Kelley

Hi everybody. I’ve made a big decision. I’ve decided to join an affiliate program with JustAnswer.

I don’t make these decisions lightly. You already know how I feel about ads and why I’ve chosen not to run them: basically, I don’t trust ad programs not to serve you ads for products I don’t believe in and haven’t tried, and they don’t deserve the real estate on my blog for how little revenue they provide.

But JustAnswer is different. It’s a service that I think will add value for you and toss me a little bit of money in exchange.

The way JustAnswer works is you ask a question on the chat window in the sidebar of the blog or at the bottom of the Ask a Question page. When you click Enter after typing your message, you will be taken to JustAnswer’s website. If I’ve set it up correctly, you should be on the JustAnswer Cat Vet page, but if not, you can find it from the home page. You will need to pay $5 for a one-week trial in order to get your question answered, but in that week you can ask as many questions of as many different types of professionals as you want. They’ve got lawyers, doctors, mechanics, plumbers–just about every kind of profession you could imagine.

I will warn you that they’ll try to upsell you to a $28 phone conversation, but the chat works just fine. Although if you do want to talk on the phone to a licensed vet, $28 isn’t a bad price for doing so. JustAnswer also has a membership, which I believe costs $29 per month.

How I decided to join JustAnswer

It was a “cold call” email that introduced me to JustAnswer’s partner program. I have to admit that at first I just brushed it off. I told the rep, “I don’t do ads,” and I thought that was the end of it. But it was actually a good thing that he didn’t give up because he explained to me what JustAnswer is and how it works. I told him I’d need to be able to check it out and ask at least one question myself so I could evaluate the quality of the service.

He set me up a demo account, and I logged in. I selected “cat vet” as the person I wanted to talk to, and I asked him a question that I’ve asked several other vets: how could a kitten get diabetes? I told him the story of Belladonna and how she’d been diagnosed with diabetes when she was just six months old, went into remission in the care of the wonderful volunteers at HART of Maine, then had a growth spurt and went out of remission for a little while….and then I got her back into remission and she’s now been successfully in remission for seven years! I know diabetes is very rare in kittens–it usually happens to older, overweight cats.

The vet was very thoughtful. His first question was whether or not the diabetes could have been a misdiagnosis. He asked me if HART of Maine had asked their vet to run a fructosamine test, and what the levels were like. I told him they had, and the fructosamine level had been high. So a misdiagnosis was off the table.

Then he conjectured something similar to what other vets I’ve asked have said: maybe there was a defect with the beta cells (the cells in the pancreas that produce insulin) that resolved once she’d finished growing. But he was very interested and said he was going to look at the literature to see if there were any similar cases reported. I reassured him that I still do randomly test Bella’s blood glucose and I have my vet do it during her annual checkup so I can make sure my meter is accurate.

So, the fact that the vet actually thought about his answer told me that JustAnswer has the potential to be very helpful to you all. That said, I want your feedback: If you use JustAnswer, please tell me if you were satisfied with your experience and if there were any issues. If it turns out that you all are not having good experiences, I’ll end my partnership with them. Thanks in advance, and here’s another place where you can ask a question if you like.