Should I Have My Cat’s Extra Claw Removed? 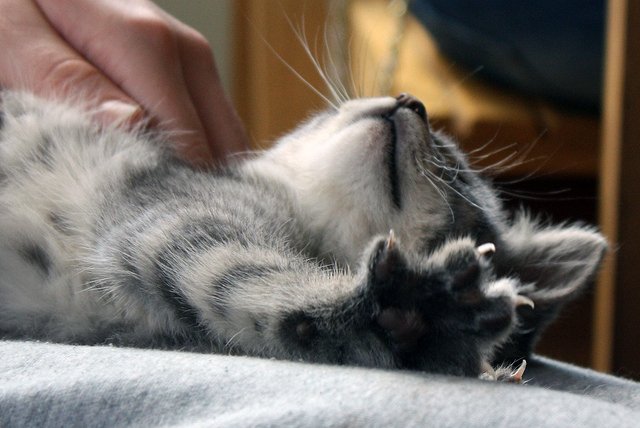 I have a 2.5 yr-year-old polydactyl named Loki. He is super cute and playful! I clip his nails regularly (about every 2-3 weeks). He has long thumbs with claws on his front paws, but on his right paw, he has an additional claw between his thumb and paw (dewclaw) which he doesn’t use. It doesn’t seem to be attached to a digit. Between all four feet, he has five extra claws, but none of the others bother him.

Since he doesn’t wear this middle claw down and it can’t retract, the claw is very thick and difficult to clip. He chews on it and it bothers him even after it is clipped. I am considering getting just that one claw removed. I really don’t want to have his thumb removed (which I hear is sometimes necessary). After doing a lot of research, and being much plagued by anti-declaw people, I am finding it hard to tell: A) the typical procedure and cost for removing one claw in the USA, and B) if there will be any negative effects (or if they typically have to remove the thumb). Any help or advice would be appreciated!

Thomas: Well, Kat, that’s a difficult question. Declawing is a very contentious issue among cat lovers, and with good reason.

Bella: If you were having all of his toes declawed, we’d say “please, please don’t do it!” But this is a special and rare case.

Tara: We’d recommend that you talk to your vet, because there’s really no way for us to know whether or not having that extra claw and toe removed would harm your cat or what the recovery period would be like.

Thomas: We suspect Loki’s recovery would be a lot shorter and less painful if you’re just removing one claw that’s not weight-bearing.

Bella: We knew of another cat that had lots of extra toes–many of which were deformed, digging into the skin, and not attached to any other bones–that in this case it was better for the cat to have all the extra claws removed and leave the ones that were weight-bearing.

Tara: This cat’s human had the same kind of questions and doubts that you do, because she too is vigorously anti-declawing and she didn’t want to leave her cat crippled and unable to defend herself.

Thomas: Your vet may not have to remove that “thumb claw,” but it really depends on the bone structure in his paw.

Bella: That’s why we think you should go to your veterinarian and discuss it with her or him. The only way to know for sure how the extra claw is attached to the rest of your cat’s paw is by doing X-rays.

Tara: Your vet will be able to tell you if the extra claw is going to cause Loki extra problem if it’s not removed. It sounds like that claw is making him uncomfortable since he’s chewing on it.

Thomas: As for the cost of declawing, that varies tremendously based on where you are. The only thing we can tell you for sure is that the procedure is bound to cost much more in an urban area than it would in a more rural part of the country.

Bella: If you do talk to your vet and the two of you come to the conclusion that it would be better for Loki to have that one claw removed, then you’ll want to ask how they do the procedure. Do they use a laser or do they do it the old-fashioned way with a guillotine-type tool?

Tara: It’s our understanding that the laser procedure is better in terms of ease of recovery, but again, that’s something you need to discuss with your vet.

Thomas: Let us reiterate that we are vigorously anti-declaw. Most of the time, declawing is done as a convenience for the guardian and does nothing to make the cat’s life better.

Bella: But there are some rare cases where it may be necessary to remove extra claws that are not bearing weight but are causing problems for the cat. We believe this is one of those cases.

Tara: Please don’t think we want everybody to go and declaw their cats! That’s just not the case at all.

Thomas: If you’re thinking of having your cat declawed for non-medical reasons, please read this post on getting your cat scratching in proper places and taking care of his claws.

Bella: Meanwhile, Kat, we think your concerns are legitimate and that they need to be discussed with your veterinarian.

Tara: And whatever you and your vet decide, you’ll know you’re making an informed decision and doing what’s in Loki’s best interest.

Thomas: How about you other readers? Have you had any experience with partially declawing a cat that had too many claws, some of which were causing problems? What did you do about it? If you had your vet remove the extra claws, how did it affect your cat? Please share your thoughts in the comments.

Bella: And be nice! Kat has written to us because she obviously cares deeply about Loki and she wants to do whatever is best for him. She’s just as conflicted as you would be in that situation. If we see any nasty comments, we’re going to delete them because she doesn’t deserve to be shamed.