My Cat Got a Sunburn. Help! 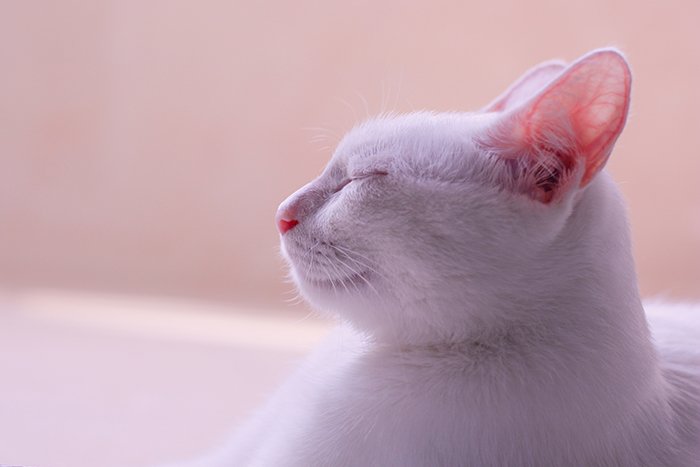 Our cat Ringo has sunburnt his ear.  He scratches it until it bleeds. Now the dried blood is thick and hope you can give some advice on what to use to soften it enough to remove. It has become so bad he is removing little pieces of the ear. Your help would be greatly appreciated.

Thomas: You might be surprised to learn that cat sunburn is not all that rare. In fact, white and light-colored cats are much more likely to get sunburns on their ears, noses, and lips than dark-colored cats like Bella and Tara.

Bella: That’s right. In the same way that dark-skinned humans are more protected against sunburn that light-skinned humans, the color of our fur (and to some extent, the skin underneath) protects us dark-colored cats against the ravages of the sun.

Tara: With that in mind, you can help protect Ringo from the sun by keeping him indoors and putting curtains or invisible UV barriers on your windows. When we talk about UV barriers, this transparent film is what we mean. You don’t have to buy it on Amazon; we’re sure your local hardware store or building center carries it.

Thomas: If Ringo does go outside, make sure to keep him in between the hours of 10 a.m. and 4 p.m., when the sunlight is at its strongest. Also make sure that he has shaded areas like under trees or in a catio so he can stay away from the sun.

Bella: There are pet sunscreens, but none of them are certified as safe for cats.

Tara: Cat sunburn, referred to as solar dermatitis by veterinarians, varies in severity, just like with human sunburns. In its early stages, it looks like scaly skin or redness, but as it advances, you might see ulcers, crusts and scabs. That’s what you’re seeing in Ringo right now.

Thomas: There is one thing you should know, and that is that repeated sun exposure can become very serious for cats, as it can for humans. Cat sunburn can actually progress to a skin cancer called squamous cell carcinoma. My Grammie Iris got skin cancer on her ears toward the end of her life–she was a calico cat who was mostly white and went outdoors, who lived to be 18, so it was bound to happen.

Bella: Either way, the treatment for skin cancer is to remove as much of the lesion as possible. There are other kinds of therapies that may be offered, including cryotherapy, laser ablation, topical medications, and chemotherapy at the site of the lesion.

Tara: According to PetMD, squamous cell carcinoma responds poorly to systemic chemotherapy. That’s why they do the therapy at the site of the lesion.

Thomas: We’re not saying this to scare you, Al and Judy, but just to let you know that skin cancer is a possible consequence of cats repeatedly getting sun exposure.

Bella: With all this in mind, we’d strongly encourage you to take Ringo to the vet and have his ear evaluated by a professional. Your vet might be able to give you some medicine to help ease the sunburn pain and irritation so he won’t scratch his ears as much.

Tara: There is one other reason why cats may scratch their ears so much they bleed, and that’s ear mites. Ear mites are horrible! They’re all itchy and they make all these weird brushing and crinkling noises in your ears as they move around in the ear canal! Yuck!

Thomas: While you’re at the vet, they may check Ringo for ear mites or any bacterial or fungal infections in the ear canal, just to make sure that his problem is in fact a sunburn.

Bella: So, Al and Judy, we hope we’ve been able to give you some good information about cat sunburn and how to prevent it. A trip to the vet will help both you and Ringo feel better in the long run. Meanwhile, if you were to get a soft, damp cloth that was moistened with warm water, and put that cloth on the lesion, it might soften the blood enough to help you remove it.

Tara: But don’t forget about that vet trip! If Ringo has cancer and not just a sunburn, it’s important to get that taken care of early.

Thomas: What about you other readers? Have your kitty friends ever experienced cat sunburn? What did your vet do about it? And how do you prevent it from happening again? Tell us about it in the comments!