Why Did My Cat Scream and Die Suddenly? 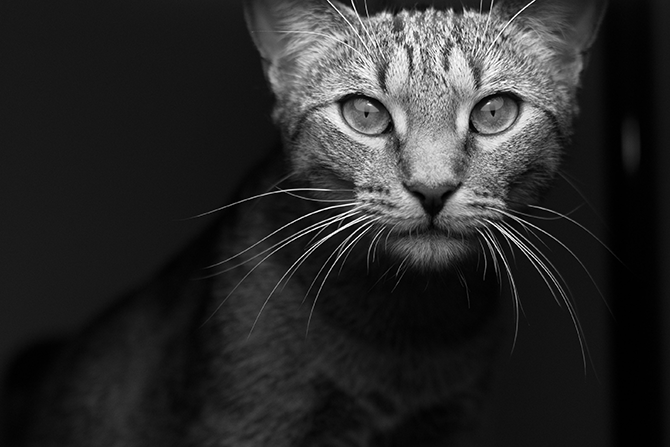 Today our nine-year-old cat died suddenly. Last week I noticed his left eye looked a bit off–I remarked to my husband that I wondered if he was losing his sight in that eye. He was perfectly normal and healthy in every other way. This morning he jumped up on the couch and laid on a blanket as usual. A few moments later, he made a dreadful screaming sort of sound, his paws/claws dug into his head, and he died. It all happened in a less than a minute. Have you ever heard of such a thing happening? My three children are quite upset so it would be a benefit to be able to tell them what may have happened to him. Thank you for any help you may have.

Thomas: First of all, Liana, please accept our deepest compassion and condolences. It’s never easy to lose a beloved cat friend, especially when it happens so suddenly.

Bella: Sudden death in cats is pretty uncommon, and it’s hard to know why it happened without a post-mortem exam. But we suspect your cat’s death had something to do with a blood clot, and possibly a stroke.

Tara: Cats can have strokes. Generally they’re not catastrophic, but they can have symptoms like changes in vision, lack of appetite, head tilt, and circling.

Thomas: The most common cause of feline strokes is heart disease such as hypertrophic cardiomyopathy, which can cause blood clots to build up in the heart.

Bella: If one of those blood clots breaks free from the heart, it could go to the brain, where it would block the blood supply and cause brain tissues to die.

Tara: If we think of humans having strokes, often they have severe headaches as a symptom. That could certainly explain why your poor kitty screamed and grabbed his head as he passed away.

Thomas: The thing about feline heart disease is that it can go undiagnosed for many years, especially if the cat appears healthy.

Bella: Then, one day, everything goes catastrophically wrong, which results in sudden death.

Tara: Another possible cause of a stroke is a hemorrhage, where a blood vessel breaks and blood leaks into the brain, again, cutting off oxygen to those tissues.

Thomas: The most common cause of a brain hemorrhage in cats is high blood pressure, which can be caused by hyperthyroidism or a heart condition. Cats can also develop problems that interfere with the blood’s ability to clot, which can result in hemorrhages as well.

Bella: We’re not sure what you mean when you said your cat’s left eye looked odd. If the pupil (the black part of the eye) was of a different size than the other, that could have been a symptom of losing sight, possibly through a hemorrhage or clot in the blood vessels that feed the retina.

Tara: The retina is the place in the back of the eye where light is collected and transmitted to the optic nerve. The optic nerve then sends signals to the brain based on the light that comes in, and the brain translates it into images, and that’s how we see.

Thomas: The only way to know for sure whether your cat had cardiomyopathy or any other of these illnesses would be a visit to the vet and some tests including blood work and an ultrasound of the heart.

Bella: But please don’t feel bad if you didn’t notice any signs. Cats are notoriously good at hiding illness. As Mama says, “cats do great … until they don’t.” And by the time they’re obviously doing poorly, they can be very, very sick indeed.

Tara: Sudden death is the most terrible manifestation of this tendency cats have to hide their sickness.

Thomas: There’s really nothing you could have done by the time your cat was as sick as he was. As you said, it took him less than a minute to go from apparently normal to dead.

Bella: So, Liana, we can only guess at what might have happened. But we think–and keep in mind that we’re not vets here, so we’re relying on our “lay-kitty” experience–that your poor little guy may have had a massive stroke, and that’s what killed him.

Tara: Whether it was caused by a blood clot or a hemorrhage is something none of us will ever know, but we hope this helps you to find some kind of closure. We also hope you don’t feel guilty, although we’re sure you do. Mama says all humans feel guilty when their kitties die, and that’s especially true with sudden death.

Thomas: Our warm and consoling purrs are with you and your three children as you go through the process of grieving your beloved cat friend.

Bella: What about you other readers? Have you had the misfortune of having a cat die suddenly? Did you ever find out what happened? How did you cope with your grief? Please share your thoughts and condolences in the comments.