Why Has My Little Lion Lost His Roar?

My 3-year-old cat, Paul, recently had a sneezing fit and a few days afterwards I noticed that no sound was coming out when he meowed. This has been going on for about a week now. Otherwise, he is behaving like he normally would, eating, going outside, cuddling and napping. Occasionally he will sneeze, but not repeatedly like the sneezing fit. What’s wrong with my “lion without his roar?” 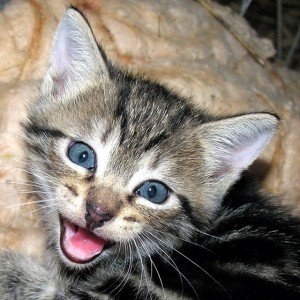 Kitten meowing, (CC-BY-SA) by Algėrds at the Samogitian language Wikipedia

Siouxsie: Well, Tanya, you might be surprised to know that cats can get laryngitis.

Thomas: Laryngitis is a swelling of the mucus membranes of the throat and voice box.

Bella: It can come from overuse of the voice, just like humans who spend hours screaming their heads off at a rock concert can barely talk the next day.

Siouxsie: Or it can be caused by coughing, which irritates the throat.

Thomas: Upper respiratory infections can cause laryngitis, too.

Bella: If a cat gets a foreign object like a grass seed or something similar stuck in the back of their throat or their sinuses, this can cause swelling and hoarseness, too.

Siouxsie: We’d recommend that you have a vet check him out and make sure he doesn’t have any swelling or other signs of illness, particularly since you said that Paul’s laryngitis developed after he had a sneezing fit.

Thomas: Of course, Paul could be giving you the “silent meow,” too. The silent meow is when a cat’s mouth is open like a meow but no sound comes out.

Bella: Some hypothesize that a cat is making a sound when he gives the silent meow, but it’s so quiet or at such a high pitch that humans can’t hear it.

Siouxsie: Of course, the silent meow is just about the most endearing thing a cat can do: it’s a great tool to make humans melt from the cuteness … and of course, give us whatever we want as a result!

Bella: Please let us know if Paul gets his roar back. We’d love to get an update on him!