How Can I Stop My Cats From Mounting Each Other?

I have two brother tomcats, both unfixed and around 10 months old. This week, I have caught the smaller cat, F, humping the larger cat, A, three times. F was even biting A’s neck. I also noticed F was stimulated. It always seems to happen when A is sleeping. Is this normal behavior? Is it bullying? I’ve heard it is a way of showing dominance. A doesn’t seem to be upset by it. He just tries to ignore F. I always tend to grab him and get him off A. Why is this happening? They are getting fixed this Friday. Will that stop the behavior? 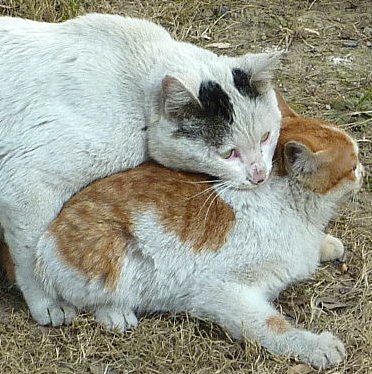 Male cats do occasionally mount one another, usually as a display of dominance. Photo (CC-BY-SA) by Wikipeddia user Vmenkov

Siouxsie: This behavior is certainly evidence that your kittens are now big boys, and it’s definitely time to get them neutered!

Thomas: Most of the time, this kind of sexual behavior between two male cats is related to dominance.

Bella: That’s not to say homosexuality is unheard of in animals, of course. I once knew a pair of dogs …

Thomas: Oh, don’t be such a prig, Siouxsie.

Bella: Anyway, Bea, having A and F neutered will go a long way toward resolving this behavior issue.

Siouxsie: It’s the hormones coursing through F that are causing him to exhibit this kind of behavior.

Thomas: And maybe A is ignoring it because he’s not quite as “developed” as his brother yet. It’s probably just as well, because if they were both aggressive toms, you’d be seeing horrific fights rather than mating-type behavior.

Bella: And you still might, if a girl cat in heat comes around your house. The smell of a female in heat can make sexually mature male cats go crazy.

Siouxsie: After A and F are neutered, it’ll take about three weeks for their testosterone (male hormone) levels to zero out, so you can expect some tomcat-type behaviors for a while after the surgery.

Thomas: The good news is that if they spray after their surgery, the spray won’t be nearly as pungent as it would have been before they were fixed.

Bella: Neutering and spaying your cats is very important! It reduces the risk of disease and injury, and it prevents unwanted litters of kittens.

Siouxsie: Did you know that spaying a female cat drastically reduces the risk of mammary gland cancer and, because a spay involves removing the uterus and ovaries, reduces the risk that your cat will develop those types of cancer almost zero.

Thomas: Male cats can develop testicular cancer, too, and neutering reduces the chance of that disease to almost zero as well.

Bella: In addition, neutering male cats will decrease their aggression and roaming tendencies. This will reduce the chance that a roaming tomcat will be hit by a car or attacked by a larger animal. Because feline immunodeficiency virus is transmitted through deep bite wounds (which often happen when tomcats fight over mating rights), the risk that he’ll develop this incurable disease goes down, too.

Siouxsie: Cats can be spayed or neutered as early as 8 weeks of age. In fact, many shelters practice juvenile spay/neuter. Because they’ve been using this technique for so long, there’s a vast body of proof that juvenile spay/neuter is not in any way harmful to cats (or dogs).

Bella: Okay, we’ll step down off our soapbox now. Bea, the short answer is that having your boys fixed should reduce and then eventually eliminate the behavior. Good luck.