Did I Kill My Cat By Mistake?

Two weeks ago I was playing with my cat, Blacky, when he scratched me badly and I slapped him on the head. He was OK afterwards — he didn’t run away or anything. I gave him food and played with him, and all seemed well. A week later, he was asleep on my bed, so I said hello to him and put my hand on his head. He woke up crying like he got a scare or his head was sore. He didn’t seem right, so I brought him to the vet, who said he had ear mites. For the next week he hid outside while my other cats came back at night. Then he came back one day unable to walk well — he was weak in the front legs and crying at the other cats, although he did eat. My mother brought him to the vet and he had blood in his ears, eyes and brain, and they put him to sleep. Could this have been blunt head trauma? A stroke? A tumor? Could I have caused this by slapping him? Would he still be eating after head trauma? I’m just so sad over this. 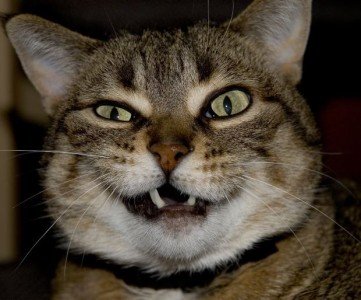 Siouxsie: This is certainly a tragedy, Ben, and we don’t blame you for being sad and feeling guilty.

Thomas: But we want to tell you that judging from our research, it’s highly unlikely that you caused your cat’s brain injury.

Bella: That’s not to say it’s OK that you slapped your cat, mind you. But unless you clocked him hard enough to send him flying across the room, we don’t think you could have killed him.

Siouxsie: Put a heck of a scare into him, yeah — which is probably why he woke up and freaked out that your hands were near his head.

Thomas: Also, ear mites are very painful and uncomfortable, so Blacky may have been trying to keep your hands away from his ears.

Bella: We think it’s much more likely that your Blacky got hit by a car or suffered some other traumatic injury while he was outside.

Siouxsie: This explains why your vet found blood in his ears, eyes and brain.

Thomas: According to the Cat Owner’s Home Veterinary Handbook, 40 percent of traumatic brain injuries in cats are a result of being hit by a car.

Bella: Plus, traumatic brain injuries take anywhere from minutes to a few days to manifest — not two weeks.

Siouxsie: Since we’re on the subject of head injuries in cats, we’re going to talk a bit more about them. Other potential causes of head injuries are falls, animal fights (including being mauled by larger animals such as dogs or coyotes), and human abusers.

Thomas: A cat with a head injury will show some fairly obvious symptoms that something’s not right. First of all, you might actually see the injury — blood, road rash or bite marks, etc., or fluid leaking from the nose, eyes or ears.

Bella: Your cat may be walking funny because his brain is misfiring — this could lead to a staggering gait or weakness in the limbs. He might also have seizures or twitching, jerking or shaking in the legs.

Siouxsie: His pupils may be unevenly dilated and his head may be tilted.

Thomas: Or he may be semiconscious or unconscious.

Bella: Head injuries are life-threatening emergencies! If your cat has a head injury, you need to get him to the vet right away, no matter what it takes.

Siouxsie: Take some basic precautions, though. First of all, a seriously injured cat may be very fearful and inclined to lash out. Head injuries can cause extra violence and aggression, so your cat may injure you if you’re not careful.

Thomas: Be careful when lifting your cat because he may have a neck or spinal injury as well, and if you don’t keep his spine as straight and level as possible, you may exacerbate his injuries and even cause paralysis.

Bella: Place your cat on his side on a flat surface and wrap him in a blanket, for his safety and for yours. The blanket will also help keep him warm because severely injured animals (or people, for that matter) can go into shock very quickly. Monitor him for vomiting — head injuries can cause vomiting — and clean the vomit away from his mouth if possible so he doesn’t inhale it.

Siouxsie: With quick veterinary treatment, a cat can recover from a head injury if that injury is not severe enough to damage the brain stem, the part of the brain that controls vital functions like breathing and the heartbeat. However, the cat may never be quite the same. Blindness, a permanent head tilt, chronic limb weakness, and in some cases behavior changes can result, depending on the location of the injury.

Thomas: The  best way to prevent head injuries is to keep your cat inside. The vast majority of brain injuries in cats are caused by things that only happen outdoors. There are lots of ways to enrich your cat’s indoor environment and even create safe outdoor spaces so that he won’t get bored.

Bella: We also recommend that all cat caretakers take a pet first aid and CPR course in order to be prepared in the event that your cat has a medical emergency. Mama recently got certified in pet first aid and CPR through a class offered by the American Red Cross. Other organizations also offer these courses; if you’re interested, do a web search to find classes near you.

Siouxsie: So, Ben, we hope we’ve helped you. If at all possible, we hope you’ll consider bringing your other cats indoors to keep them safe from possible injury.

Thomas: Compassionate purrs to you and your family.