We have a 1-1/2 year old Siamese cat, Nahla. When she was a year old, she went in to the vet to be fixed, and during that, she had a complication and went into cardiac arrest. After two weeks in ICU, they determined she would be okay except for the fact that she was blind. We brought her home and she adjusted really quickly — she does great getting around our house. It’s been five months, and we recently got a puppy. We took the puppy straight to a room where she does not go, and let her have free run of the rest of the house so that she would feel comfortable. She seemed to do well — no hissing, only fluffing her tail up when she would pass the puppy’s room. This morning, however, she had an “accident” in our bedroom (her safe place) and there seemed to be a bit of blood in her stool. She’s been staying mostly in our bedroom since then, but still seems okay. She’s also still been eating well. Could this have been just from stress of the new puppy? 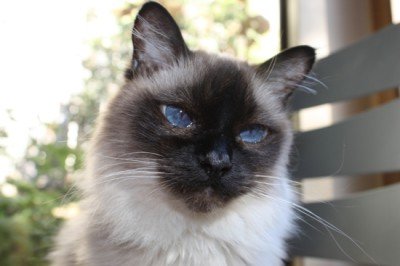 Siouxsie: It seems to us there are a couple of things going on here, and we’re not totally sure they’re related.

Thomas: Sometimes cats will have a little bit of blood on their stools if they’re constipated — the straining and hard stools will cause tiny tears in the blood vessels around the anus.

Bella: On the other hand, diarrhea can also produce small amounts of blood because of the irritation it causes.

Siouxsie: Stress can cause changes in bowel habits, as it can with humans. Nahla may also be reluctant to use her litterbox if it’s near the puppy’s room, so if this is the case, you may want to try moving it to an area that feels safer.

Thomas: If you are going to move her litterbox, though, you’ll need to do it slowly, particularly since she’s blind.

Bella: We would recommend that you call your vet about the bloody stools. They’d rather have you call if nothing serious is wrong than have you not call if she does have a big problem.

Siouxsie: They’ll probably want you to describe the blood you’re seeing on her stools, because this will help them to determine if Nahla should come in right away.

Thomas: The second part of this issue is the stress of having a new puppy in the house. You’re doing the right thing by letting Nahla have run of the house and ensuring that the puppy doesn’t have unsupervised contact with her.

Bella: However, the two of them are going to have to meet at some point.

Siouxsie: We’d strongly recommend that you start training the puppy, if you haven’t done so already. Nahla will be a lot safer if the dog responds promptly and correctly to your commands.

Thomas: Crate training the pup might be a good way to allow Nahla and the pup to get to know each other in a safe way. Inside the crate, the puppy won’t be able to physically touch Nahla but will get to know her body language.

Bella: Of course, you’ll want to make sure Nahla’s litterbox is in a place where she won’t get ambushed by the puppy (and where Puppykins won’t eat the “snacks” he finds in there).

Siouxsie: You might also try Feliway or a calming pheromone collar for Nahla. These products release scents that help cats to feel less stressed and can help alleviate behavior problems like inappropriate elimination. Here are some other ways to be sure Nahla is comfortable in her home, even if changes do happen.

Thomas: PAW Rescue has some great tips for introducing a new dog to a cat. We think these could be helpful as you go about introducing your new puppy to Nahla.

Bella: We think you’ll be heartened by this wonderful story of a blind cat and a blind puppy who are the best of friends. We think that with training and with the advice from PAW Rescue, Nahla and the pup will become friends, too.