How Can I Capture A Wounded Feral Cat? 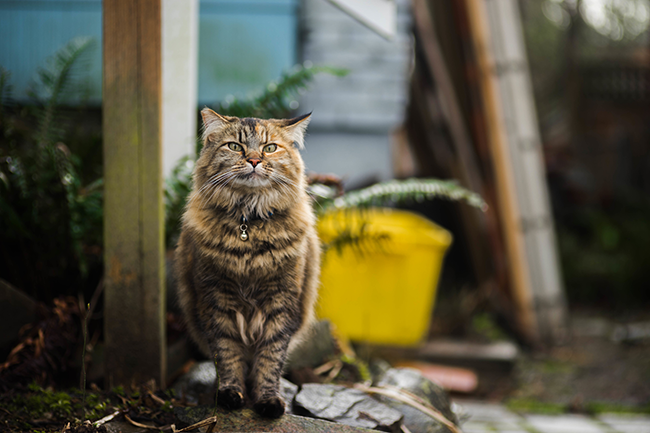 I know what I need to do, but getting it done is another problem. There’s a colony of feral cats living in my neighborhood. My neighbors have been gracious enough to capture them, get them neutered, and release them back into their territory. But recently I saw one of them limping. I got a look at his back foot and it has some pus coming out of it and he holds it up when he walks. I’ve been able to domesticate a few of the cats and get them to allow me to pet them, but not the wounded cat. What, if anything, can I do about getting this poor feral cat captured and taken to a vet again? I have a feeling he is cautious of traps from being caught before and being fixed. As a side note, the ferals are getting on vehicles. Some neighbors don’t want them to do this and have threatened to remove them. Is there anything that can be done about keeping them off the vehicles?

Thomas: Ah, the ever-elusive feral cat. You’ve definitely set yourself a tough goal trying to get this guy in to the vet, but it can be done.

Bella: He clearly either has an abscess or some other more serious injury, and he definitely needs help!

Tara: As you already know, feral cats get wise to traps, but it’s still possible that you might be able to capture him.

Bella: They also recommend that you camouflage the trap by covering it with a dark towel and putting it under bushes or outbuildings.

Tara: Once you’ve got the larger trap and you’ve got it camouflaged, you’ll need to make it really extra-enticing, and you’re going to do this by changing up the bait.

Thomas: Instead of using canned cat food or kibble, try using mackerel or sardines. Obviously, make sure you get fish that’s just packed in oil or water and doesn’t have extra flavoring like mustard.

Bella: Also, before you put out the new bait, think about withholding food for a day. A hungry cat is more likely to take the bait. You’ll also have to keep your neighbors from putting out food for the cats.

Tara: An injured cat probably won’t be able to hunt well, so your wounded feral cat will probably take the bait more easily than the others.

Thomas: Another way you can attract a feral cat into a trap is to boil valerian root and douse the trap in the water. Valerian root has an attraction and effect very similar to catnip, and it can attract cats who aren’t into catnip.

Bella: Did you know that about half of cats aren’t attracted to catnip?

Tara: Anyway, back to Jeffrey’s question. The valerian should work to attract your injured feral cat into the trap.

Thomas: You might end up re-trapping some of the other feral cats, too, and that’s why you want to have a bunch of traps set out.

Bella: Did you work with a trap/neuter/return group to get the feral cats the first time? If so, they may have some other tips to help you re-capture the injured feral cat.

Tara: Now, for your second question: how to keep the cats off cars.

Thomas: That’s kinda tough, because cats will do what they want. Cars make nice sunning spots because the metal heats up with the sun, and they also provide a vantage point where the cats can see what’s going on below them.

Bella: But if you train the cats to go elsewhere, that could help.

Tara: For example, don’t put their food near the cars. If the cars are parked in front of houses, feed the cats in back yards or wooded areas.

Thomas: If the cats have shelters, move them away from the front yards, too.

Bella: Basically, what you’re doing here is moving everything the cats care about away from where the cars are parked.

Tara: We think this will help keep the feral cats off your neighbors’ cars.

Bella: What about you other readers? Have you experienced hard-to-trap feral cats? What did you do to get them into the traps? Please share your tips in the comments!