Can Kidney Failure Appear in Just A Year?

Last year, one of my cats did from chronic renal failure at age 14. Because we were concerned about our other cat, Gizzy, we had the vet give him all the appropriate tests. All the results seemed good, and we were relieved. But then last week Gizzy wasn’t acting like himself and his breath smelled bad. We took him to the vet, who said he was fine — no fever, his chest sounded good, and he wasn’t dehydrated — and since all the tests came back good last year, he probably just had a stomach bug. Gizzy got worse that night, so we took him to an emergency clinic, where the vet told us the odor of his breath was evidence of kidney failure. We took him back to our own vet the next day; she conducted another set of blood tests and confirmed that he was in the very late stages of kidney failure. She said that Gizzy was so ill there was really nothing that could be done. When we asked the vet how Gizzy could have gotten so sick, so quickly, she said, “Well, one year is seven years to a cat.” We had Gizzy put to sleep because we didn’t want him to suffer — but we can’t understand how the disease could have come on so quickly. We feel they might have gotten the results wrong last year. Is this possible? 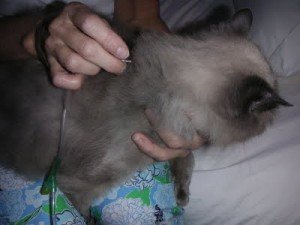 Subcutaneous fluid therapy is a cornerstone in managing chronic renal failure in cats. Image courtesy of the Summer is a Verb blog

Siouxsie: First of all, Dawn, we’re so sorry for your loss. It’s especially hard when it’s so sudden and unexpected.

Thomas: Chronic renal failure (CRF) is a progressive and fatal disease, but when diagnosed early and managed with treatments like subcutaneous fluids, a cat with CRF can live comfortably for anywhere from one to three years after diagnosis.

Dahlia: The trouble is that cats don’t actually begin showing signs that they have kidney disease until they’ve lost at least 70% of their kidney function. By that time it’s too late to do much more than manage the illness.

Siouxsie: And when a cat presents in the late stages of kidney failure, as Gizzy did, there really is very little that can be done to prolong that cat’s life.

Thomas: Signs of early kidney disease are very subtle, and sometimes even lab tests won’t show anything extraordinary. Test results just slightly outside the normal range can be seen even in healthy cats and these are not generally viewed as alarming signs if the physical examination shows that the cat is otherwise in good shape.

Dahlia: One of the reasons vets recommend regular blood tests and urinalysis for older cats is that your vet might be able to see a trend of changes in your cat’s blood chemistry values that can indicate the early stages of diseases like CRF, hyperthyroidism, or other conditions sometimes seen in senior cats.

Siouxsie: But now to answer your question, Dawn: Can kidney failure really come on so suddenly? Could a cat really get that sick less than a year after receiving normal blood tests?

Thomas: The answer, from what we’ve been able to determine, is that it certainly is possible.

Dahlia: We haven’t found any sources that say that the progression from normal health to imminently fatal disease has to take any specific amount of time at all.

Siouxsie: The onset and progression of kidney disease seems to be determined by a combination of things from genetics to diet to environmental issues and stress. There’s really no way to know how this combination of risk factors will play out in any individual cat’s life.

This chart shows cat ages in terms of the human lifespan. Notice, too, that outdoor cats age a lot more quickly than indoor cats.

Thomas: Although cats do age faster than humans, most vets these days believe that after the first few years of life, one year in a cat’s life is the equivalent of about four years in a person’s life.

Dahlia: But that’s splitting hairs, really. The point is that because cats age faster than humans, regular vet exams are especially important for senior cats.

Siouxsie: Clearly you did all the right things by making sure Gizzy had the appropriate lab tests. Jeez, I’m 15 and even I haven’t had a full blood panel and urinalysis lately.

Siouxsie: *hisss* Drat! But Mama, I’m so healthy, even Doctor Jim said he wouldn’t believe I’m older than 8 if you hadn’t told him so!

Dahlia: Anyway, Dawn, there’s really no way to know if there was a mistake in interpreting Gizzy’s lab tests from a year ago. But we do want to reassure you that it is possible he was healthy a year ago and became that sick in such a short time.

Siouxsie: We know how hard this time is for you and your family, and we hope we’ve been able to set your mind at ease by at least telling you it’s possible … and by the same token, it’s quite possible (probable, in fact) that your vet did not make an error that cost your beloved Gizzy his life.

Thomas: Our blessings and purrs go out to you and your family, Dawn.

Dahlia: If any of you other readers have a cat with CRF, we highly recommend you visit the Feline CRF Information Center website. It’s a great resource for information on treatment and research, tips on how to give fluids and other home care, and a place for caretakers of CRF cats to find emotional support as they take this journey with their feline family members.