Can A Cat Be Healthy on a Vegan Diet?

I recently heard on the radio that Ellen DeGeneres is coming out with a line of vegan cat food. Is that even a healthy possibility for our cats? I thought they naturally ate meat proteins. 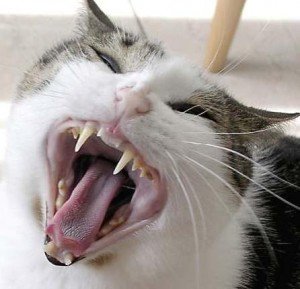 Do these look like the teeth of an herbivore to you? Image courtesy of free-extras.com

Siouxsie: After all four of us (that would be the three of us cats and Mama too) went “WHAAAAT?!?” when we heard that Ellen’s pet food company is coming out with a line of vegan cat foods, we did some research to verify this fact.

Thomas: Apparently there’s a fairly decent niche business in the vegan pet food market. We even found a website that sells only vegan dog and cat foods.

Dahlia: We know quite a few vegan humans, and we understand and respect the health, spiritual and political reasons for their choice to embrace an animal product-free lifestyle. But the fact of the matter is that while most humans can live well on a vegetarian or vegan diet, cats can’t — no matter what PETA or the celebrity talking-head of the week says.

Siouxsie: Cats are obligate carnivores. They have to eat meat in order to stay healthy. While many domestic cats seem to do okay on grain-based kibble, it does not provide optimum nutrition. In fact, a number of veterinarians and nutritionists attribute the alarming rise in feline obesity and diseases like diabetes and chronic urinary and digestive problems to a carbohydrate-rich diet. 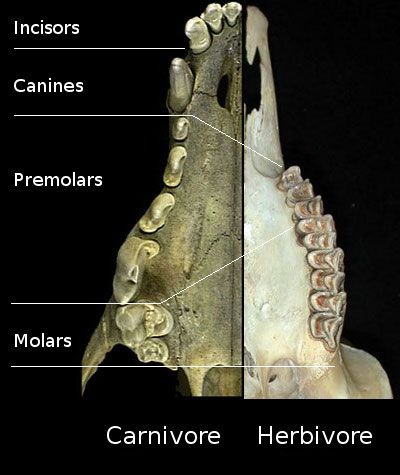 The teeth of a carnivore on the left and those of an herbivore on the right. Herbivores have lots of molars for grinding their food. They also don't have fangs or incisors. Carnivores like cats, on the other hand, have few if any molars and the teeth they do have are designed for ripping, not grinding. Image courtesy of the U.S. Bureau of Land Management

Thomas: How do we know cats are carnivores? First, just take a look at their anatomy. While humans and herbivorous (plant-eating) animals like horses have relatively large stomachs, molars designed for grinding food, and a long intestinal tract that allows time to absorb nutrients from plant foods, cats have small stomachs, short intestines, and teeth designed for ripping meat off bones and swallowing it whole.

Thomas: And because cats evolved to be such specialized carnivores, their bodies lack the chemicals necessary to digest and use the energy from grains.

Dahlia: Because we’re designed to be meat eaters, our livers are always creating the enzymes needed to break down proteins. In humans and other omnivorous animals, the liver starts and stops making the enzymes as needed.

Siouxsie: That’s one reason why cats get so sick if they don’t eat for a while. If there’s no food to break down, a cat’s body starts breaking down the proteins that keep the body functioning.

Thomas: While humans and other animals are able to manufacture an enzyme called Taurine, cats aren’t. We need to get our taurine from the food we eat, and the best source of taurine is … meat.

Dahlia: Sure, pet food manufacturers supplement the cat foods they make with a variety of vitamins and nutrients, including taurine, but eating an unnatural diet — whether it’s a vegan diet or one composed strictly of colorful meat-flavored kibbles — is, in the long run, not the healthiest choice for your cat.

Siouxsie: So, exactly what’s in vegan cat food? And how do they make it palatable for carnivorous animals?

Thomas: Mama went to the vegan pet food website we mentioned earlier (we’re not going to link to it, but you can Google “vegan cat food” and it’ll appear in the top of the results) and took a look at the ingredients in some of these products.

Thomas: If I ate those foods, I’d get so sick! I’d be crying in pain and having awful, awful diarrhea all the time!

Dahlia: There, there, Thomas. It’s okay. Mama knows you have a serious sensitivity to grains and she would never feed you anything that would make you suffer like that.

Siouxsie: Even if Thomas didn’t have digestive issues, we still wouldn’t eat cat food with grain in it. Like we said earlier, cats’ bodies are not designed to digest grain. We strongly advocate for grain-free diets for all cats, whether or not they can eat grain without getting obviously sick.

Thomas: The botrom line, Donna, is — you’re right. Cats do need to eat meat protein to be healthy.

Dahlia: And if you want a fluffy pet that’s also a vegan … get a bunny!