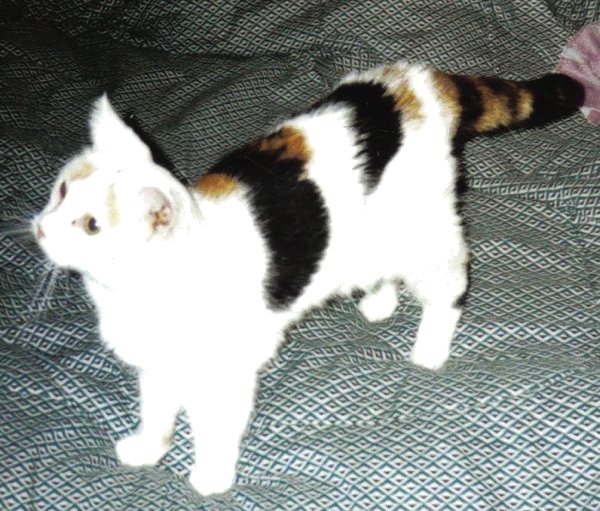 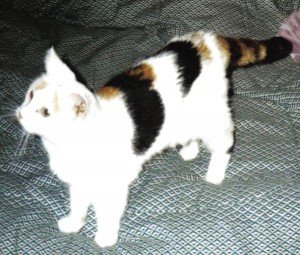 On a spring day in 1982, a woman and two children made their way to their local animal shelter. The older of the two children, a girl of 13, made her way directly for the cat room, while her little brother, lured by the barking of half a dozen dogs, went outside to play with them. The girl’s mother reminded her son that we’d come here specifically to adopt a cat, and she would tolerate no more begging for a dog (they already had one dog at home, and he was more than they could handle half the time). Long-faced, the boy followed his mother and sister into the cat room.

The family surveyed the cats in the cages. There was an old tabby male with a half-chewed ear, obviously a survivor of many fights. In another cage was an orange and white cat who eyed the family with a sullen look, almost daring them to open his cage. They looked at many cats and kittens, and even played with some of them. But there was no spark.

Until they arrived at the cage by the door. Inside, a sweet calico kitten with sea-green eyes stared up at them, greeting them with a queaking mew. She was almost entirely white, except for patches on her back and tail, and a couple of small spots on her head. The children’s mother took the calico kitten out of the cage and picked it up. As soon as she began to stroke its tiny head, the cat began purring and won the woman’s heart over. She let the kids take turns holding the kitten and playing with it, and then asked them what they thought. The boy nodded, smiling, and the girl (who really hoped to get a black cat but didn’t want to start an argument) said, “Sure.”

And so it was that my family adopted Iris the Cat.

For almost 18 years, Iris was a great mouse hunter, a loving family companion, a caring and capable mother, and the store mascot at my mother’s shop. I witnessed the miracle of new life when Iris gave birth to litters of kittens in a box in my bedroom. I learned about unconditional love from Iris’ affections in my moments of sadness. And most of all, I learned about the mysterious bond that forms between humans and four-legged creatures, a bond which transcends the petty dramas of human life.

One such lesson stands out clearly in my mind. In the spring of 1993, I was visiting my mother’s house in the country. A flock of wild turkeys had taken up residence at the edge of a nearby corn field, and one afternoon I decided I wanted to sneak up as close to them as I could. My plan was to walk from the house to the edge of the woods that skirted the corn fields, and then cut through the forest until I reached the place where the turkeys were nesting. So I put on my quietest hiking shoes and set out toward the woods. As I reached the edge of the forest, I looked back and saw that Iris was following me. “Go on, get away,” I whispered, sure that she would scare the turkeys before I ever had a chance to look at them.

She looked at me as if to say, Yeah, right.

Without missing a beat, Iris walked in front of me and into the forest. She looked back at me with a Well, what are you waiting for? look, and I followed in her path. We made our way through the woods slowly and (sort of) quietly. Often I had to duck under hanging branches that Iris wouldn’t even notice, standing only a foot tall as she did. Every time I stepped on a branch with my big, clumsy human feet, she’d shoot me a reproachful look as if to say, Some stealthy creature you are!

We wended our way through the forest, into a deer bedding area (I could tell it was a deer bedding area because floor of the clearing was soft and mossy and there were little piles of deer turds at its edges) where a chipmunk chittered noisily at me for invading its space–and thereby destroying any hope I’d had of getting near the turkeys. Eventually Iris led me to the edge of the woods, where I saw several large bird nests in low tree branches, between two and four feet off the ground. I didn’t get too close to the nests, because I didn’t want to scare the birds away by the presence of human odor.

After I’d seen the nests, Iris led me through the shrubs at the edge of the woods and into the field. When I could see my surroundings, I realized I was in the corn field where the turkeys had been nesting. I thanked Iris for leading me on a wonderful expedition and apologized for the clumsiness of my feet, and we walked together back to the house.

How Iris knew I wanted to find the turkeys, I have no idea. The only explanation I can think of is that this incident adds credence to the belief that animals have a kind of telepathy with not just other animals, but with their human families as well. The fact that she was willing to lead me through the woods, on a route as direct as any I might have taken, is just incredible. I saw Iris in a whole new light after that incident, and she and I bonded in a very special way on that spring day.

On Saturday, October 2, 1999, Iris died peacefully at her home, near the people she loved, among familiar surroundings and smells.

I had so many feelings about Iris’ death that it was hard to sort them out. In a way, I felt bad because when we first adopted Iris, and for several years thereafter, I “liked other cats better.” We had some other cats in our house — Purr Bear, a fluffy Maine coon cat; Castor (whose twin brother, Pollux, had been hit by a car some months before we adopted Iris); Iris’ kittens; and so on — and for some reason I had felt more attracted to these other cats. Part of me felt guilty that I had slighted Iris for so long. The other cats I held and loved more have come and gone, but Iris was always there.

I was also somewhat relieved by her passage. In the last few months of her life she was really starting to show her age. She remained affectionate and purring, and still enjoyed her food and her family, but she’d gone deaf, was blind in one eye, and was getting quite forgetful. My family is blessed to have a friend who is a homeopathic veterinarian; she helped us to ease Iris’ passing and make the end of her life as comfortable as possible. The last month was the hardest to watch, because she’d had a stroke and it was becoming increasingly difficult for her to eat and move around. She never acted as if she was in pain, but it was getting harder and harder for her to function.

I had started saying good-bye to Iris a couple of months before she actually passed, but only about six hours before she died, did I know for sure that her last hours were here. She was lying down in her cat carrier in the mud room at my mother’s place (it was warm and sunny there), her eyes open. As I walked through the kitchen to the mud room, she looked up at me with her one good eye and meowed “hi.” I knelt down and touched her hip gently. Tears fell from my eyes as I watched her struggle to her feet and turn around so her head faced me. I gently stroked her head and wiped some slime off her muzzle, crying and and telling her, “Good-bye, Iris. Go to sleep now; it’s okay.” It hurt me more to see her alive in that state than it would hurt to see her die.

I stopped by my mother’s house again around 11 p.m. that night. As I walked through the mud room and into the kitchen, I thought I saw Iris poke her nose out from under the table and duck back under. I was just about to make a comment about Iris’ new-found mobility when my mother told me she had died about 2 hours before. I breathed a sigh of relief. I was glad the end had finally come, and that it had been a tranquil one. But what had I just seen under the kitchen table? Had I just imagined I saw Iris … or perhaps her spirit was bidding me one last farewell.

The sadness of losing Iris did abate after a while. As with any healthy grieving process, the stages pass, you integrate the experience, and you begin to remember your deceased friend or relative with fondness and joy. I still get a little misty from time to time when I talk about Iris, but my own feline roommates, Sinéad and Siouxsie, were wonderful comforters during my initial grief. Not only that, but I’ve been fortunate enough to have many friends who are understanding about the feelings I experienced after losing Iris. I’m glad to have had the validation of people who know that losing anyone who shared your life for 18 years–whether they have two legs or four–is a saddening experience.

Now, Iris is wherever cats’ souls go, but I believe that someday she’ll return. If I’m meant to share my life with her again, she’ll find me. If not, I know she will bring a lifetime of joy, magic and love to the person lucky enough to be blessed by her presence.