Cats in Japan: Updates and How to Help

We’ve been following the events in Japan after the tragic earthquake and tsunami that struck on Friday, March 11, and we’ve decided to break from our usual letter-answering format to give you some reports on the status of well-known Japanese cats and information on how you can help efforts to rescue animals in the disaster-stricken areas.

First, some happy news about our cat friends: 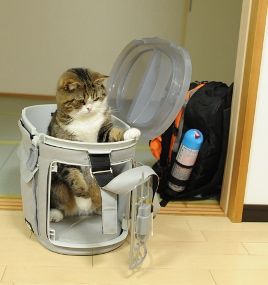 Maru is safe and sound, although he and his person are ready to evacuate if they need to.

Maru (the famous Box Cat), Pokke, Meme, and the Momo Rescue Group are safe and sound. Although power is out in many places in Japan, including the town where Maru lives, these cats are alive and well.

Goma the cat is also safe. Yesterday she reported in her blog: “I received many e-mail from Goma blog readers about their concerns about my family in Japan. so I decided to do a quick post. My parents and one of my younger brother live in Kyoto, and another brother lives in Tokyo. Kyoto is far enough from Sendai where the Earthquake started, but Tokyo is fairly close. I was worried about my brother live there. Especially after I saw some report about building in Tokyo collapsing. I spoke with my mother and confirm that everyone in my family are safe for now…but danger is still there, Now they are saying nuclear plant might explode… that will definitely affect my family. … My heart goes out to hundreds of people and pets who passed away, injured and missing… thanks again guys for your prayers and support!!”

Tashirojima, also known as Cat Island, is very close to the epicenter of the quake and was thought to have been submerged. However, a person commented at The Conscious Cat “I have a friend in Japan who managed to get in touch with people who knew about Tashirojima -– people and cats are said to be okay, but there was a lot of building damage and they need bare necessities for humans and cat food… The Japanese organizations said they couldn’t help at the moment (my friend was very frustrated) and he’s checking for some other foreign organizations which maybe could help. He also found out that a Japanese defense forces’ helicopter landed there this afternoon. So that’s hopeful. Lots of volunteers are going to be needed there to help rebuild the island.”

Now, how can you help the animals?

First of all, give wisely. As with any natural disaster, there will always be nasty, hiss-worthy scam artists who ask for your money and then don’t do anything.

Right now, the best thing you can do is make cash donations. When the organizations get their crews there, they can use those donations to get the things the animals need the most. There is presently no way to get food or material goods to the area due to the destruction of ports and roads. In addition, due to the looming nuclear crisis, people are being evacuated and even the usable roads presently have roadblocks keeping people from getting into the affected areas.

Mama has done her “due diligence,” as they say at her workplace, a nonprofit community foundation, and is willing to vouch for these organizations’ legitimacy. 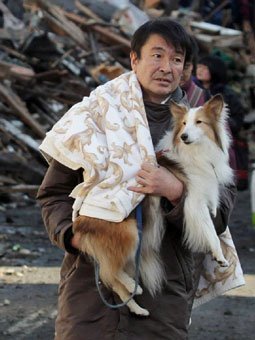 World Vets, a non-government organization (NGO) providing veterinary aid around the globe in collaboration with animal advocacy groups, foreign governments, US and foreign military groups and veterinary professionals abroad, is deploying a first responder team to Japan. They are currently coordinating with US Army veterinarians and will get their vet teams into the area as soon as it is safe to do so.

The American Humane Association’s Red Star Animal Emergency Services Team is monitoring the situation closely and is reaching out to its international partners in order to provide a joint response to the disaster. American Humane has set up a relief fund to help the animal victims of this tragedy, and you can donate through the link on their website.

Animal Refuge Kansai is an organization in Kansai, Japan, that is preparing for a huge influx of animals from the disaster areas. You can donate via PayPal through their home page; please include a note “for earthquake animals.”

Japan Earthquake Animal Rescue and Support is a collaboration of three no-kill animal welfare organizations in Japan; HEART-Tokushima, Animal Friends Niigata and Japan Cat Network. Join their group on Facebook for more details and information on how you can help.

The Animal Miracle Network is collecting cell phones to send to the volunteers helping animals in Japan. Many volunteers don’t have phones and need them to effectively communicate with each other. Be sure the phone works and include batteries and accessories that may come with it. It doesn’t matter what kind of phone or network it is. The organization said, “We have a knowledgeable person there who is receiving the phones and who will pre-check these kinds of issues so people know what they’re getting and can make a choice.” Send to: Animal Miracle Network 4804 NW Bethany Blvd. Suite 12-197 Portland, OR 97229. (Mama e-mailed AMN directly and confirmed that this is really happening and that it’s not just another one of those wild internet rumors.)

And, of course, if you’re inclined to pray, in whatever way your spiritual tradition indicates, all that good energy will certainly help.

Please note that we are not in any way discounting the fact that hundreds of thousands of people have been killed and had their lives destroyed by this horrific disaster. There is tremendous publicity for all the organizations preparing to help humans — including the Red Cross, World Vision, Mercy Corps, and military and non-government forces from countries all over the world. We simply want to share some less-publicized information about how you can come to the aid of the animals as well.