A Special Visit to a Special Friend of Cats

Last weekend I took a 250-mile road trip from Maine to Connecticut to visit my good friend and fellow cat blogger, Robin Olson of Covered in Cat Hair.

Why? Not just for spits and giggles.

First of all, I wanted to visit with Robin and Sam because they’re awesome. Secondly, I wanted to meet the litter of six kittens whose antics I’ve been following on her blog and Facebook page — one of whom is named after my sweet, beloved Dahlia. (By the way, they’re almost ready for their forever homes, so go to Kitten Associates and fill out an adoption application if you’re interested!) 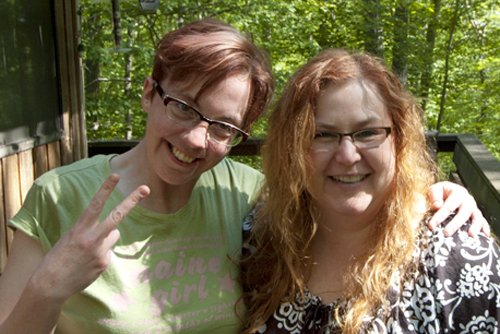 JaneA (representin' the two-oh-seven) and Robin. Photo by Sam Moore

And finally, there’s another cat who’s been in Robin’s care for quite a while. She was a teen mom, pulled (with her litter) from the Henry County Animal Shelter in Georgia at the last possible minute and transported to Robin’s rescue, Kitten Associates, by a wonderful network of individuals who strive every day to save cats from high-kill shelters in the Deep South.

I’ve been following Bobette’s story on Covered in Cat Hair ever since she arrived in Connecticut. I watched as her kittens grew up and found homes. I hoped for a good outcome as I learned that Bobette was sniping and hissing even at her own kittens, and then as Robin discovered the most likely source of Bobette’s bad temper — a luxated patella that made it impossible for her to walk without pain — my heart was filled with compassion.

I sent good mojo as Bobette had the surgery that got her kneecap back into position and did the best she could not to go nuts during her extended period of post-surgery cage rest, and as Robin and Sam lovingly tended to her every need. 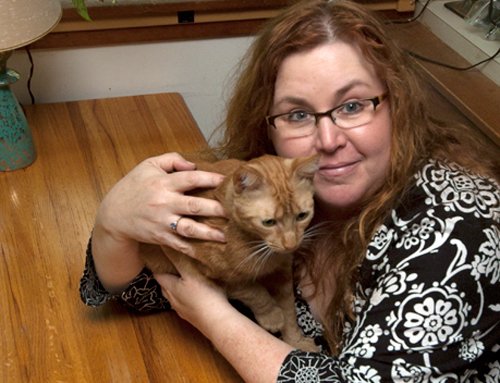 Every time I saw a picture of Bobette’s sweet face and soulful eyes, my heart melted a little.

After Dahlia died and Thomas and Siouxsie and I got through the worst of our grieving, I realized how empty my house felt with only two cats in it. I started thinking about Bobette more and more. I knew Robin would have a hard time placing a special-needs cat like Bobette, who will need some level of pain management for quite a while — any of you who have had knee surgery know how long it takes to recover from that — if not for the rest of her life. She may even require more surgery in the future. I don’t know.

But what I did know is that I’m ready for that.

I made a commitment a long time ago that from now on I would adopt cats with special needs. I’m an experienced and knowledgeable cat caretaker who is willing to go the extra mile (or the extra many miles) for a cat when it’s called for.

I’d been talking to Siouxsie and Thomas about the possibility of bringing another cat into our family, and they seemed amenable to the idea. Thomas especially misses having a “snuggle buddy,” so I almost hope that they become best friends. If they don’t, though, that’s OK too. 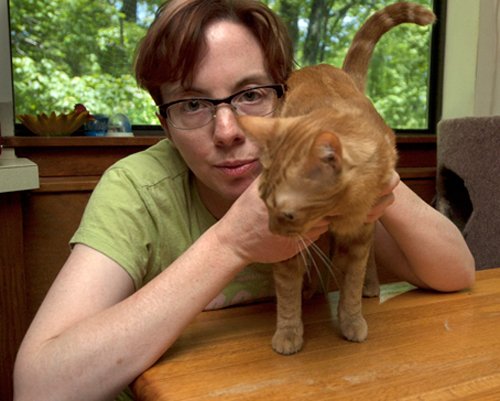 So, beyond even visiting Robin and Sam and seeing cute kittens in action, I went to Connecticut to meet Bobette. I wanted to find out if she and I would make that special connection. We connected, all right! It was like we knew each other the moment we met. I like to think it’s because I’ve been “talking” to Bobette for a few weeks, asking her if she’d like to come home with me. I even gave her a code word, which might become her name — Chrysanthemum — and told her that when I saw her I’d call her by that word.

When I sat on the floor and called, “Chrysanthemum,” she came running to me and rubbed against my hand, purring like crazy.

Bobette and I spent quite a bit of time hanging out. She would “go to bed” in the guest bathroom at night, so I took every opportunity to spend time with her there. During the day she had the run of the house and enjoyed watching squirrels out the window.

Although I’d expected Bobette-Chrysanthemum to get along well with me and I was 99 percent sure I was going to adopt her — later on this year — I had no idea how deep the connection would be.

This weekend, I adopted Bobette. 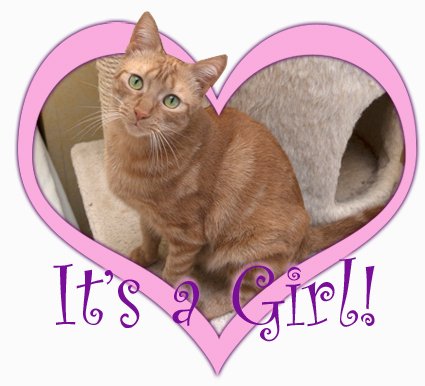 Yesterday afternoon at 12:30, I left Robin’s house with my precious cargo. When I stopped at a parking area off I-495 to do a “cat cleanup” after the poor thing lost her breakfast, I noticed that she was starting to get overheated. (I suspect this is the main reason she vomited.) So, off we went, with the A/C blasting. Goose bumps are a small price to pay to keep a cat from getting heat stroke!

When I got Bobette home, I set her up in my office — I moved my computer into the living room, cleaned, gave her a litterbox and the new set of Catty Stacks to climb on and look out the window, and made her a bed out of a cardboard box lined with a pillow and towels. Food and water (laced with the Stress Stopper Spirit Essence) were placed, and now it was time to see what happened.

Thomas and Siouxsie are curious, of course. They smell her. And she smells them. But the introduction is going to take a while.

I’ll be blogging about the process of introducing Chrysanthemum-Bobette to her new family in order to show you how it works. Each cat is different, and so is the amount of time it takes for the introductions. Stay tuned, and please welcome the newest member of the Paws and Effect Gang!